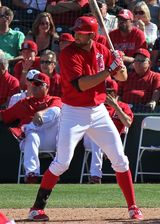 Third baseman Kyle Kubitza began playing in the Atlanta Braves minor league system in 2011. He was taken by the club in the 3rd round of the 2011 amateur draft, one pick after pitcher Tony Cingrani. Scouted by John Barron, his signing bonus was $261,000.

On January 8, 2015, he was traded to the Los Angeles Angels of Anaheim alongside Nate Hyatt for P Ricardo Sanchez. he began the season in the Pacific Coast League with the Salt Lake Bees where he hit .287 with 21 doubles in 57 games before getting the call to the Show. He made his debut with the Angels on June 10th, starting at second base against the Tampa Bay Rays. He got two hits in three at-bats, but also made a couple of key mistakes as the Angels lost, 4-2. At the end of the 2nd inning, with runners on second and third, he tried to tag out Kevin Kiermaier for the third out instead of throwing to first, and the delay allowed Nick Franklin to score. In the 3rd, after getting a single off Erasmo Ramirez in his first big league at-bat, he was thrown out attempting to go from first to third on Erick Aybar's single, killing a potential big inning.