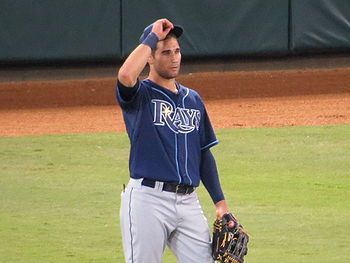 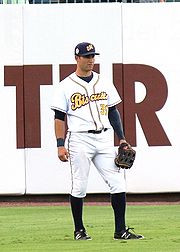 Kevin Kiermaier made his MLB Debut on September 30, 2013.

Kiermaier hit .430 with 17 homers, 90 runs and 71 RBI in 56 games for Parkland College as a freshman. The Tampa Bay Rays took him in the 31st round of the 2010 amateur draft; Tom Couston was the scout. He hit .303/.380/.431 that summer for the Princeton Rays, with 44 runs, 7 triples, 17 steals (in 22 tries) and 8 outfield assists in 57 games. He was 10th in the Appalachian League in average, tied for 4th in steals, 5th in OBP, tied for second in triples (one behind Brenden Webb) and tied Aderlin Rodriguez for 4th in runs. He did not make the league All-Star outfield as Oswaldo Arcia, Oscar Taveras and Javier Rodriguez were picked, with Jose Rivero as a utility outfielder selection. 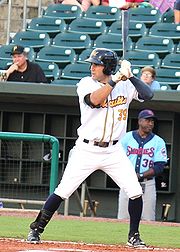 Kiermaier hit .241/.316/.338 for the 2011 Bowling Green Hot Rods, though he did show speed (8 triples, 27 steals in 37 tries) and a cannon outfield arm (18 assists). He tied Rymer Liriano and Rolando Gomez for 5th in the Midwest League in triples. Among Rays farmhands, he was 5th in steals and tied Isaias Velasquez for third in three-baggers. In the winter, he hit .303/.378/.394 as a backup for the Canberra Cavalry of the Australian Baseball League. Baseball America named him as the best defensive outfielder in the Rays chain.

Kiermaier made his major league debut in the one-game playoff between the Rays and Texas Rangers to determine the last team to make the postseason in the American League on September 30th; that made him the last of 230 players to make their debut that year. He did not get into the game until the bottom of the 9th, when he came in as a defensive substitute in center field with the Rays leading, 5-2. The Rangers went down in order and Kiermaier did not have a defensive chance. He was then added to the roster for the Wild Card Game and was used as a defensive substitute in that context as well. In 2014, he played 108 games, hitting .263 with 10 homers and 35 RBIs. He split his time between right field and center field on defence. In 2015, installed as the full-time centerfielder, he emerged as one of the top defensive players in baseball, posting remarkable numbers and winning a Gold Glove as the top centerfielder in the American League and a Platinum Glove as the top-rated defensive player in the majors according to various advanced defensive metrics. With the bat, he continued to be a productive player,, hitting .263 again, with 25 doubles, 12 triples and 10 homers; he scored 62 runs and stole 18 bases in 23 attempts and also drove in 40 runs.

On May 21, 2016, Kiermaier broke two bones in his left hand while attempting a diving catch in the outfield against the Detroit Tigers. He almost made a spectacular catch to rob James McCann of a base hit but the ball popped out of his glove, and he had to leave the game immediately. He was reactivated on July 15th, having missed almost two months of action. He ended up playing 105 games, batting .246 with 12 homers and 37 RBIs. Thanks to his increased power and drawing more walks, leading to a decent OBP of .331, he ended up with an OPS+ of 104 in spite of the low batting average. In spite of the time lost to injury, he repeated as the AL's Gold Glove centerfielder. In spring training of 2017, the Rays decided to make a long-term investment in his services, signing him to a six-year contract extension worth $53.5 million. What was interesting was that he was a player whose greatest value came form the defensive side of the ledger, and that the Rays' willingness to commit financially to a player of his type was a sign that teams had much greater confidence in defensive metrics than had been the case only a few years earlier. On June 8th, however, he broke his hip in an awkward feet-first slide at first base in a game against the Chicago White Sox, putting him once again on the shelf for an extended period. He was hitting .258 in 62 games, with 7 homers and 20 RBIs. He only came back on August 18th, but was able to play regularly the reset of the season, finishing at a career-high .276 in 98 games, with 15 homers and 39 RBIs.

In 2018, he was injured again after just 12 games, when he tore a ligament in his thumb while sliding into second base. The injury required surgery, forcing him to miss two months of action. He returned on June 19th and played regularly until late September, although he hit just .217 with 7 homers and 29 RBIs in 88 games. It was clear that he was not fully healthy and that this was affecting his hitting, and the Rays rested him the final week of the season. Still, his defense continued to be outstanding and the team defied all expectations by winning 90 games. He returned fully healthy in 2019. On April 17th, he did something extremely rare as he was caught stealing twice in the same inning. He led off the 7th with a single against Mike Wright of the Baltimore Orioles. He attempted to steal second, but the throw from Jesus Sucre beat him by a good margin - but SS Jonathan Villar dropped the ball and the play was scored a caught stealing and an error on Villar. Kiermaier was then picked off second by Wright when he tried to take a very generous lead because the O's were playing a defensive shift. That was also recorded as a caught stealing. It was the first time this had happened since 2011, when Brandon Phillips had been the vitim. The Rays, off to a blazing hit start, won that game, 4-2.