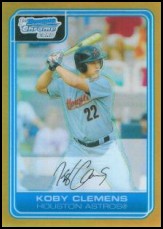 The oldest son of Roger Clemens and brother of Kacy Clemens, third baseman Koby Clemens was selected by the Houston Astros in the eighth round of the 2005 amateur draft. He was signed by scout Rusty Pendergrass.

In 2008, Clemens was converted to catcher, which is where he played the majority of his games for the Salem Avalanche of the Carolina League. In 109 games, he hit .268/.369/.423 in 109 games. He made the news for non-baseball reasons on August 30th when he and two teammates, Mark Ori and Jimmy Goethals were arrested for taking part in a brawl in a local restaurant. He was charged with disorderly conduct and the charges were soon dropped, and the incident would have probably gone completely unnoticed if not for his famous name. In 2009, the Astros' top Class A team moved form the low-offense Carolina League to one of the most hitter-friendly environments in the entire minor leagues, with the Lancaster JetHawks. Thus, Koby's statistics were boosted immensely: in 116 games, he hit .345 with 45 doubles and 22 homers, driving in 121 runs. He also played in AA for the first time that year, getting into 5 games with the Corpus Christi Hooks. In 2010, he spent the whole season with Corpus Christi, playing 127 games, but as a first baseman now. He hit .241, but with 22 doubles and 26 homers, with 75 runs and 85 RBI. he was promoted to AAA in 2011, spending the year with the Oklahoma City RedHawks. He played at first and third base, but hit only .234, although he still had decent power, with 21 doubles and 16 homers. However, he was let go after 8 seasons in the Astros' organization, having lost his status as a prospect.

In 2012, Clemens spent the season in the Toronto Blue Jays' organization, getting into 64 games between the Class A Dunedin Blue Jays and AA New Hampshire Fisher Cats. He was back playing catcher, in addition to some time at first base and at DH, for a combined batting line of .246/.350/.450. On September 7th, he signed a one-game contract with the Sugar Land Skeeters of the Atlantic League in order to catch his father, making the second start of his "comeback"; it was the first time the two had played together in a professional game (although they had faced one another in intrasquad games while at spring training with the Astros). His dad pitched 4 2/3 scoreless innings, and his team won, 4-0, against the Long Island Ducks.

Clemens retired as a player following the 2014 season and joined the Houston Astros as a member of the player development staff. His first assignment was to work with young farmhands at the Astros' extended spring training facility in Kissimmee, FL, after which he would move on to a job as an assistant coach for one of the team's short-season affiliates.

This manager's article is missing a managerial chart. To make this person's article more complete, one should be added.
Retrieved from "https://www.baseball-reference.com/bpv/index.php?title=Koby_Clemens&oldid=1252682"
Categories: