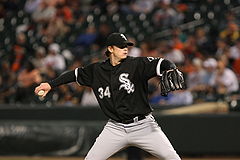 Gavin Floyd is a right-handed pitcher who spent most of his major league career for the Chicago White Sox. A first round draft pick of the Philadelphia Phillies in the 2001 amateur draft, he progressed rapidly through the minor league system and made his major league debut in September of 2004. After the young prospect struggled with Philadelphia in 2005 and 2006, he was traded to the Chicago White Sox. Floyd was an International League all-star in 2007, but his ERA soared to 5.27 in 70.0 innings with the White Sox.

Floyd's brother, outfielder Mike Floyd, was also selected by the Phillies in the 2001 draft.

As a high school student in Maryland, Floyd established himself as a premier pitcher with the success of his curve ball. In 2001, Baseball America rated his breaking pitch the second best in the nation among high school pitchers. He went 8-2 with a 1.11 ERA as a senior at Mount St. Joseph. Scouted by Ken Hultzapple, the Phillies drafted the pitcher with their first pick in the 2001 amateur draft and signed him for $4.2 million just days before Floyd would have started college classes at University of South Carolina.

Floyd enjoyed a successful 2002 season with the Lakewood Blue Claws of the South Atlantic League. He surrendered just 119 hits in 166.0 innings pitched. Floyd's record for the club was 11-10 and he led all starters with a 2.77 ERA and 140 strikeouts. He tossed a no-hitter on July 24, 2002. Baseball America named the Maryland native the Phillies' best prospect, and the ninth ranked prospect in all of baseball.

The 20 year old's record fell to 7-8 in 2003, but Floyd impressed fans with a 3.00 ERA for the Clearwater Phillies. He led the club with 115 strikeouts, and was third in innings pitched with 138.0. Floyd pitched a scoreless inning for the USA Team in the 2003 Futures Game at U.S. Cellular Field. Following the season, he dropped to second in Baseball America's rankings of the Philadelphia farm system, surpassed only by Cole Hamels. The publication dropped Floyd 14 spots to 23rd in their list of baseball's top 100 prospects.

Floyd dominated the Eastern League as a member of the Reading Phillies in 2004. He was the youngest pitcher to exceed 10 starts for the club, but still led the staff with a 2.57 ERA. After limiting opponents to 93 hits in 119.0 innings, Floyd was promoted to AAA, where he posted a 4.99 ERA in 30.2 innings. On September 3rd, the 21-year-old debuted with Phillies. He held the New York Mets to one run on four hits in seven innings to earn his first major league win. After 6 outings - four of which were starts - Floyd owned a 2-0 record and a 3.49 ERA.

Floyd began the 2005 campaign in the Phillies' rotation, and kicked off the year with a victory, giving up just 1 run over 7 innings to beat the St. Louis Cardinals on April 9th. However, he struggled from there onward. The 22-year-old had 14.14 ERA after his next 3 appearances. The club sent Floyd back to the Scranton/Wilkes-Barre Red Barons to work out his flaws. Things were no better in the minor leagues. Floyd was 6-9 with a 6.16 ERA in 24 appearances in the International League. He returned to the Phillies in September and appeared in 3 more games with the club. On September 4th, Floyd recorded a quality start against the Washington Nationals.

Much like 2005, Floyd began the 2006 season as a member of the Phillies' rotation, but once again, he struggled. In 54 1/3 innings, opponents clubbed 14 home runs. Floyd owned a 7.29 ERA in 11 starts before returning to Scranton/Wilkes-Barre for the remainder of the year. His record was 7-4 with the Red Barons. Floyd's reputation as one of baseball's top prospects had dissolved.

Following the 2006 season, Floyd was traded to the Chicago White Sox along with prospect Gio Gonzalez for established starter Freddy Garcia. Kenny Williams and White Sox management hoped to reform the 24-year-old right-hander. Floyd battled for a rotation spot during spring training in 2007, but was ultimately sent down to the AAA Charlotte Knights. It turned out to be the young pitcher's best season in the International League. He won 7 games with an ERA of 3.12 in 17 starts for the Knights. He also posted the best strikeout per nine inning rate of his career, fanning 96 opponents in 106 2/3 innings.

Floyd's time spent with the White Sox in 2007 was turbulent, but he finished strong. On July 6th, the Minnesota Twins hit four home runs off the Sox pitcher. The Detroit Tigers scored seven runs on eleven hits against Floyd on July 24th. His first strong outing was on August 5th when he held the Tigers scoreless for six innings, and struck out seven. In September, Floyd tossed four quality starts to finish the month with a 3.19 ERA. In total, the former first round pick's record for the season was 1-5, his ERA was 5.27, and he surrendered 17 home runs in 70.0 innings.

Floyd had a breakout season with the White Sox in 2008, posting an excellent 17-8 record in 206 1/3 innings as the Sox won the AL central title. He lost his only start of the postseason, to the Tampa Bay Rays in the ALDS. He then settled into being a solid, consistent and reliable starter over the next four years, although without spectacular results. From 2009 to 2012, he made between 29 and 31 starts each year, winning between 10 and 12 games, while losing between 11 and 13 with ERAs between 4.06 and 4.37. He pitched around 190 innings the first three seasons, then fell to 168 in 2012. In 2013 however, he was felled by elbow problems in May, and only made 5 starts, going 0-4, 5.18. He then underwent Tommy John surgery.

The White Sox parted ways with Gavin after the 2013 season and on December 16th, he signed a free agent contract with the Atlanta Braves, who agreed to pay him a guaranteed $4 million even though there was no certainty he would be back pitching in the majors before the end of the season.

He did manage to return to the majors fairly quickly, making his first appearance of the 2014 season as a starter on May 6th. He was 1-2 with a 2.98 ERA when he suffered a significant setback on June 19th, however, as he broke a bone in his elbow while throwing a pitch against the Washington Nationals. He had to leave the game after six scoreless innings and was given credit for the win as he headed back to the disabled list. He did not pitch again that season, ending the year at 2-2, 2.65.

He chose rest to try to heal the injury and in 2015, the Cleveland Indians signed him, gambling that the approach would work. Id did not, as he was not able to pitch in spring training and decided to undergo surgery on his elbow. That meant that he would be out for a good part of the season, and did not return until September. He then made 7 appearances, all in relief, with no record and a 2.70 ERA in 13 1/3 innings. On February 6, 2016, he moved to yet another organization, inking a deal with the Toronto Blue Jays for one year. He pitched 28 times, all in relief, going 2-4, 4.06 before his season ended with an injury in June. The Jays re-signed him for 2017, but he was released at the end of spring training and retired.