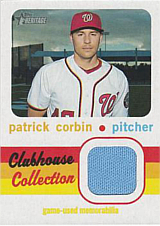 Lefty Patrick Corbin is a two-time All-Star who won a ring with the Washington Nationals in 2019.

Patrick made his major league debut on April 30, 2012 against the Miami Marlins. Taking the place of Josh Collmenter in the rotation, he pitched 5 2/3 innings, and after being staked to a 7-0 lead, gave up three runs but ended up with the win as Arizona prevailed, 9-5. He struggled a bit in the 1st, loading the bases, before escaping with an inning-ending double play, then did not allow another hit until the 5th inning. He stayed with the Diamondbacks for the remainder of the season and held his own, finishing at 6-8, 4.54 in 22 games, including 17 starts. He pitched 107 innings, and while he gave up 117 hits, his K/BB ratio of 86/25 was a sign of future success.

The predicted success came very quickly, as Patrick was one of the best pitchers in the National League at the start of the 2013 season. On May 14th, he defeated the Atlanta Braves, 2-0, pitching 7 shutout innings to earn his 6th win against no loss. His performance earned praise from recently retired Braves star Chipper Jones, who stated "This Corbin dude is pretty nasty!" on his Twitter account. Randy Johnson was the only other pitcher in team history to open a season with wins in his first six decisions. Corbin made it seven in a row in beating the Colorado Rockies, 5-1, on May 20th. It was his first career complete game and was achieved at Coors Field, where he gave up only three hits, in the process lowering his ERA to 1.44, second-best in the NL behind Clayton Kershaw. On June 2nd, he became the first major league pitcher to notch 9 wins, although it was not his best performance, as he gave up 4 runs to the Chicago Cubs in 6 innings, but his teammates scored 8 runs. He tied Brandon Webb for the best start to a season in team history, and the D-Backs had been winners in all 11 of his starts at that point. Unsurprisingly, he was named the National League Pitcher of the Month for May, on the strength of his record of 5-0 and his 1.53 ERA. He was the first D-Backs pitcher to win the honor since Dan Haren back in 2008. He was still undefeated at the end of June - one of two pitchers in the majors in that situation, along with Max Scherzer - having in the meantime improved his record to 9-0, with an ERA of 2.22, which was why he was selected to be part of the NL squad in the 2013 All-Star Game. He celebrated by logging his 10th win of the year the next day on July 7th, 6-1 over the Colorado Rockies. He finished the year at 14-8, 3.41, pitching 208 1/3 innings with 178 strikeouts.

Corbin was slated to be the Opening Day starter for the Diamondbacks in 2014 as they opened their season against the Los Angeles Dodgers in Sydney, Australia, but he did not make the trip down under, being diagnosed with damaged ligaments in his elbow a few days before the team was slated to leave. He opted to have Tommy John surgery on March 25th, with the hope of being ready for the start of the 2015 season. His return to the majors only came on July 4, 2015, when he was a 7-3 winner in a start against the Colorado Rockies. He made 16 starts for the D-Backs, finishing at 6-5, 3.60 with an excellent K/BB ratio of 78/17 in 85 innings, giving indications that he was back to where he had been before the injury. In 2016, he struggled badly, finishing at 5-13, 5.15. He was moved out of the starting rotation for a spell, given his struggles, making 24 starts out of his 36 appearances.

Corbin bounced back nicely in 2017, going 14-13, 4.03 in 32 games. He pitched 189 2/3 innings, allowing 209 hits but striking out 178 batters, matching his career high. The Diamondbacks surprised by winning the top wild card slot in the National League, but he was not used in the postseason, as the D-Backs went with their top three starters - Zack Greinke, Robbie Ray and Taijuan Walker - and Arizona was swept in three games by the Los Angeles Dodgers in the NLDS after winning the Wild Card Game. He got off to a great start in 2018 as he was 3-0, 1.65 after four starts. The fourth, on April 17th, was the best of his career thus far, as he held the San Francisco Giants hitless until two were out in the 8th. Brandon Belt ended his bid for a no-hitter with a squibbler towards third base that had been vacated because of a defensive shift. The game was still scoreless at that point, but in the bottom of the inning, he laid down a sacrifice bunt to advance Jarrod Dyson to scoring position, from where he was driven by David Peralta for the game's only run. Corbin completed his gem with a perfect 9th inning to record a one-hitter and the first shutout of his career. He made it to the All-Star Game for the second time and, while his record was just 11-7, his other numbers were outstanding: an ERA of 3.15; 246 strikeouts and just 162 hits allowed in 200 innings.

When Corbin became a free agent after the 2018 season, he was considered the best starting pitcher available, prompting a bidding war among a number of teams said to be interested in his services. The Washington Nationals won out on December 4th by offering him a six-year deal worth $140 million. He finished the first year in fine form, going 14-7, 3.25 in 33 starts, striking out 238 batters in 202 innings. He was 2-2, 5.84 in the postseason, with his best work coming in the World Series. After a relief appearance and a start, he took the ball from Max Scherzer in the fourth inning of the deciding Game 7 and got the W, allowing only two hits in the middle innings as the Nats triumphed, 6-2. At the end of the season, Corbin received the Warren Spahn Award, bestowed on the best left-handed pitcher in baseball each season.