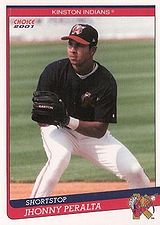 Jhonny Peralta accepted a 50-game suspension resulting from MLB's investigation of the Biogenesis Laboratories on August 5, 2013. He came back to play for the Detroit Tigers in the postseason, where he moved from shortstop to left field, and hit .333 (11 for 33) with four doubles and a homer in 10 games. The Tigers had acquired fielding whiz José Iglesias to play short in anticipation of his suspension. On November 24th, he signed a four-year free agent deal with the St. Louis Cardinals, as a likely replacement the weak-hitting combination of Pete Kozma and Daniel Descalso. The large contract drew some criticisms, as many players went on the record stating it was unfair that Peralta was being rewarded financially for having cheated.

Peralta did very well in his first season with the Cardinals in 2014 as he played 157 games, hit .263 with 38 doubles and 21 homers, scored 61 runs and drove in 75. He hit .214 in the Division Series against the Los Angeles Dodgers but only .118 (2 for 17) as the Cards were eliminated by the San Francisco Giants in the NLCS. He foilowed this with another very solid season in 2015, one in which he returned to the All-Star Game, for the first time as a National Leaguer, hit .275 in 155 games, and lashed out 26 doubles and 17 homers. He scored 64 runs and drove in 71 as the Cardinals had the best record in the major leagues during the regular season. However, he was unable to solve the pitching staff of the Chicago Cubs during the Division Series as he went 2 for 14 (.143) while the Cardinals were defeated in four games. He was set to return for a third season as the Cards' shortstop in 2016, but on March 5th, he tore a ligament in his left thumb while fielding a ground ball during an exhibition game, an injury that would make him miss two to three months of action. He was reactivated on June 6th, but by that time he had lost his starting job at shortstop to rookie Aledmys Diaz. The Cardinals decided to have him play third base instead, moving Matt Carpenter to second base and demoting Kolten Wong to the minor leagues. Jhonny then got off to a strong start, going 8 for 24 with a pair of doubles and a homer in his first week back. He played 82 games, hitting .260 with 8 homers and 29 RBIs while playing almost exclusively at third base.

In 2017, however, Peralta played only 21 games, hitting .204 with no extra base hits or runs batted in before the Cardinals had him designated for assignment on June 9th, swallowing $6 million in unpaid salary in the process. He had missed a month of action with what was described as an upper respiratory illness. The Cardinals were underperforming badly, prompting them to cut ties with the veteran infielder. He then signed a minor league contract with the Boston Red Sox on June 23rd, but was released on July 13th and never played professional baseball again.