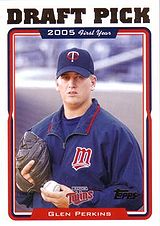 Pitcher Glen Perkins was selected by the Minnesota Twins in the first round of the 2004 amateur draft. He was signed by scout Mark Wilson for a $1.425 million bonus and made his pro debut that summer.

Perkins made his big league debut late in the 2006 season.

In 2014, playing in the All-Star Game for the second straight year, he got the honor of preserving the American League's 5-3 lead in the 9th inning in front of hometown fans at Target Field. He fulfilled his duty with aplomb, retiring Miguel Montero, Josh Harrison and Charlie Blackmon in order to earn the save. He recorded 34 saves that season, to go with a 4-3 record and a 3.65 ERA. It was his second straight season of 30 or more saves, as in 2013, he had saved 36 wins for the Twins, to go with a 2-0 record and a 2.30 ERA.

Perkins returned to the All-Star Game for a third straight year in 2015 after a remarkable first half in which the Twins surprisingly became contenders in the AL Central. In 38 appearances before the break, he recorded 28 saves in as many opportunities, while maintaining an ERA of 1.21. He once again was given the honor of pitching the final inning of the Midsummer Classic; it was not a save situation as the American League had a 6-2 lead heading into the bottom of the 9th, and this time he allowed a run on a triple by Ryan Braun and a sacrifice fly before closing out the game. He suffered his first blown save in his first outing of the second half on July 18th when he squandered a 2-0, 9th-inning lead to the Oakland Athletics. It was the start of a very difficult second half in which hje posted an ERA of 7.32 and only 4 saves in 22 games to finish the year at 3-5, 3.32 with 30 saves in 60 games.

Glen made only two appearances at the start of the 2016 season, one of them a blown save, before landing on the disabled list with a shoulder strain on April 13th. Kevin Jepsen took over for him as the Twins' closer. On June 16th, the Twins announced that he would need surgery on the shoulder and that he was done for the season. He returned briefly in 2017, but his season was again cut short by injury, as he did not make his first appearance until August 17th, and pitched only 8 times, with no decisions and an ERA of 9.53. The final batter he faced in his last appearance on September 30th was Austin Romine of the Detroit Tigers, who popped out to Kennys Vargas at first base. It was also a memorable game for Romine, who had played all nine positions that day. The Twins did not put Perkins on the roster for the Wild Card Game. In January of 2018, he announced that he was retiring at age 34 after the Twins had declined to pick up his option for the upcoming season.