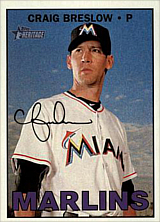 "What initially drew me to Craig was his quiet confidence and even-keeled nature. He was a calming presence amid the flurry of activity at Yale and he always knew what to say when disaster struck. When I failed my first calculus exam as a freshman, he was there to pick up the pieces. When my high school girlfriend dumped me, he was there to point out her flaws. And within a week, he had set me up on a blind dated that ultimately failed, because, as Craig put it 'You can't kiss a girl on the forehead on the first date. It just makes you look like an impotent creep.'" - Matt McCarthy, from his memoir Odd Man Out

Craig Breslow pitched over a decade in the majors. In January 2019, he became the Director of Strategic Initiatives for Baseball Operations for the Chicago Cubs.

Signing with the San Diego Padres for 2005, Craig was 2-1, 2.75 for the Mobile BayBears, allowing a .212 average in 52 innings over 40 outings and striking out 47, walking 17. He was 0-1 in 7 games for the Portland Beavers, allowing a 4.00 ERA, and appeared for San Diego in 14 outings, striking out 14 in 16 1/3 innings but with 15 hits and 13 walks. His ERA was 2.20 and he had no decisions for the Padres. He became the 24th Yale alum to play Major League Baseball. Moving to the Boston Red Sox system in 2006, Breslow failed to make the team out of spring training and began the year with the Pawtucket Red Sox, where he was 7-1, 2.69 in 39 games with 7 saves and 77 strikeouts in 67 innings. That earned him a ticket to Boston at the end of the season, where he recorded his first two decisions in the majors - both losses - in 13 games, with an ERA of 3.75. He spent all of 2007 with Pawtucket, going 2-3, 4.06 in 49 games, including his first professional start. He was claimed off waivers by the Cleveland Indians after failing to make the Sox staff out of spring training in 2008, and made 7 appearances with the Indians before being put on waivers again. This time, the Minnesota Twins claimed him and gave him a home in their bullpen for the remainder of the season, with 42 appearances and a tidy 1.63 ERA. Overall, he went 0-2, 1.91 in 49 games, earning his first major league save.

In 2009, Breslow was hit hard in 17 games for the Twins, giving up 10 earned runs in 14 1/3 innings for a 6.28 ERA. He did earn his first major league victory during that stretch, but still ended up on waivers for the third time in a little over a year, being claimed by the Oakland Athletics. There, he was able to right the ship and, moving out of a LOOGY role, had a 7-5 record with a 2.60 ERA in 60 games, securing a firm spot in the A's bullpen. He was second in the AL in games pitched despite the team transition, two behind Matt Guerrier. In 2010, he went 4-4, 3.01 in 75 games and picked up 5 saves. He was again second in the AL in pitching appearances, ten behind Randy Choate. He was back with the A's in 2011, when he went 0-2, 3.79 in 67 games. On December 9th, he was traded to the Arizona Diamondbacks, along with Trevor Cahill, for Jarrod Parker, Collin Cowgill and Ryan Cook.

On August 18, 2012, Craig combined with fellow Eli Ryan Lavarnway to form the first all-Yale University battery in the major leagues since 1883 (Al Hubbard and Jack Jones). Craig forced an inning-ending double play on the first pitch he threw. He split that season between the D-Backs and the Red Sox, being traded for pitcher Matt Albers and outfielder Scott Podsednik at the trading deadline. He had an excellent year, going 3-0 with a 2.70 ERA in 63 appearances. Up to that point, he had always been a generic middle reliever without much to set him apart from the mass of other pitchers performing a similar job in the majors. In 2013, however, he became one of the key men out of the Red Sox bullpen, serving as a set-up man for closer Koji Uehara alongside Junichi Tazawa. He pitched 61 times with a record of 5-2 and an outstanding 1.81 ERA. The Red Sox went from last to first in the AL East that year, and Breslow continued to do well in the first two rounds of the postseason, his first taste of October baseball. In the ALDS he won a game against the Tampa Bay Rays in 3 games, not giving up a run, then made four more scoreless appearances in the 2013 ALCS. In the World Series, his three outings were not so good, as he managed to record only one out, while giving up 3 hits and 2 walks. No matter, the Sox still won the Series in 6 games, giving Craig a World Championship ring. He got a ring of another kind a couple of weeks later, as he was married in early November. Breslow said he had set the date over a year earlier, pitching for a last-place team, avoiding an October date "just in case".

Breslow fell to 2-4, 5.96 in 60 games for the 2014 Red Sox, saving one game. He rebounded in 2015 (0-4 and a save, 4.15 in 45 games). The Miami Marlins signed him for 2016 and he split time between Miami (0-2, 4.50 in 15 games) and the New Orleans Zephyrs (1-3, 2 saves, 6.46 in 14 games). Let go, he was signed by the Texas Rangers but was lit up in three outings for the Round Rock Express (5 hits, 3 runs in 2 innings) and released again. That made him available for the Israeli national team in the 2017 WBC Qualifiers, where he again formed a battery with Lavarnway. He relieved Josh Zeid with a 2-1 deficit, one on and two outs in the 7th against Great Britain. He allowed a hit to Chavez Young and retired Albert Cartwright. Israel scored four to get Breslow credit for the win; in the 8th, he got two outs but then allowed a hit to Jasrado Chisholm and a walk to Chris Berset and was relieved by Ryan Sherriff. In the finale, also against Great Britain, he relieved Jeremy Bleich with two on, two outs and a 6-1 lead in the 8th and retired fellow former major leaguer Antoan Richardson before Brad Goldberg closed it out in the 9th. In February 2017, Craig returned to Minnesota and made the Opening Day roster. He made 30 appearances out of the pen to a 5.23 ERA and was released at the end of July. The Cleveland Indians gave him another opportunity and he made his final 7 big league appearances for the Tribe with a 4.15 ERA. An attempt to get back to the bigs with the Toronto Blue Jays fizzled out at Triple A in 2018, and he hung up his spikes to take a front office job with the Cubs in January 2019.

Breslow is featured prominently in the 2009 book Odd Man Out: A Year on the Mound with a Minor League Misfit by Matt McCarthy. He played with McCarthy at Yale and was his best friend, with the two ending up on rival teams in the 2002 Pioneer League.