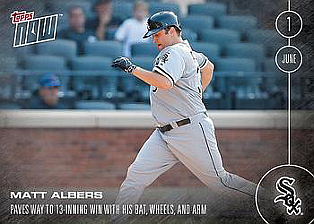 Matt Albers was drafted by the Houston Astros as a draft-and-follow pick in the 23rd round of the 2001 amateur draft. After a year of junior college, he was signed by scout Rusty Pendergrass the next May and made his pro debut with the Greeneville Astros in 2002. Once a highly touted starting pitching prospect in Houston, he has since bounced around as a dependable middle reliever.

Albers might be best known for his work as a member of the Chicago White Sox. In 2015, he suffered a fractured finger in a brawl in a game against the Kansas City Royals on April 24th. He was not on the field when the skirmish started after Yordano Ventura taunted Adam Eaton after retiring him on a comebacker, but joined his teammates on the field for the fracas that ensued. Six players received suspensions for their actions in the melee, but Albers was not one of them. Still, he came back in mid-July and pitched well the rest of the way, finishing the year with a sparkling 1.21 ERA in 30 games and a K/BB ratio of 28/9 in 37 1/3 innings.

Back with the White Sox in 2016, he had perhaps his finest day on June 1st. Called to pitch the 12th inning of a 1-1 tie against the New York Mets at Citi Field, he responded with a scoreless frame, then was allowed to bat to lead off the 13th, with Chicago running out of substitutes. In his first at-bat since 2009, he laced a double to deep left-center off Logan Verrett, then advanced to third on a wild pitch and scored on a sacrifice fly. He completed his day's work by working a scoreless bottom of the 13th to get credit for the win.