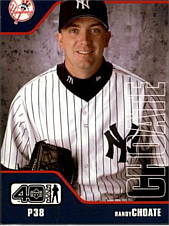 Randy Choate was a longtime LOOGY in the major leagues, appearing in 672 games over fifteen seasons. Due to his extreme usage patterns, he holds a number of freakish records.

A fifth round pick of the New York Yankees in 1997, Choate got his first big league taste with a 22-game stint for the 2000 world championship squad. From 2001 to 2003 with the Bronx Bombers, he gave up only one home run (to Vernon Wells of the Toronto Blue Jays, in 2002) in a span of 74 1/3 innings. Before the 2004 season he was on the move twice, heading firt to the Montreal Expos in a package for Javier Vazquez before moving to the Arizona Diamondbacks for the pitching John Patterson. Choate had his first season of heavy lifting in 2004, making 74 appearances (50 2/3 innings) with a 4.62 ERA, before spending much of the next three seasons in [[Triple A] and the entirety of 2008 mainly with the Nashville Sounds of the Milwaukee Brewers organization.

He made a strong showing in the 2008 Caribbean Series, appearing in five of six games for the Aguilas Cibaeñas while tossing 3 2/3 innings, allowing one hit and no runs while striking out five. Randy became a key bullpen piece after joining the Tampa Bay Rays as a free agent before 2009, leading the American League with 85 appearances in 2010, a year after recording his first five big league saves. He posted his best ERA, 1.82 in 54 games (24 2/3 innings) for the 2011 Florida Marlins. That season, he set a record with 20 consecutive hitless appearances between April 25th and June 13th. Those appearances only accounted for 8 2/3 innings, but he still struck out an impressive 12 batters without giving up a single hit, walking 2 and plucking 1. In 2009, he had set a different record, with 21 straight appearances without recording a strikeout; he only pitched 9 1/3 innings while setting the mark.

In 2012, Choate was traded in midseason from the now Miami Marlins to the Los Angeles Dodgers, along with Hanley Ramirez, for Nathan Eovaldi and Scott McGough. Even though he was tied (with Shawn Camp and Matt Belisle) for the National League lead with 80 games pitched that season, he did not record a single win or loss, his only decision being a save coupled with a tidy 3.03 ERA. He next pitched for the St. Louis Cardinals from 2013 to 2015, making 9 scoreless appearances as the Cards reached the 2013 World Series, eventually losing to the Boston Red Sox. In the 2014 postseason, he gave up 3 runs on 2 hits and 3 walks in only an inning of work spread over 5 appearances. In 2015 he set a record as LOOGYest LOOGY ever, by making 71 appearances but logging just 27 1/3 innings, the smallest ratio of innings per game pitched ever recorded; in 20 of his appearances, he failed to retire a single batter, which is also a record. In 2016, he went to spring training with the Toronto Blue Jays but failed to make the team and was released, then signed with the Dodgers again. He made 34 appearances in their minor league system with an ERA of 7.13 and was not called up to the big league club, retiring at season's end.

Choate made 672 appearances comprising just 408 innings in the majors over 15 seasons, with all appearances coming as a reliever (he did start 43 games in the minors, most of these over his first two professional seasons in 1997 and 1998). He had only 30 career decisions - 16-14 - and 7 saves, with a 3.90 ERA. He was very good at his very specialized role. He retired at the same time as Javier Lopez, another long-time lefty specialist; the pair were second and third on the all-time list for most appearances in which they had faced only one batter and recorded one out: 198 for Lopez and 185 for Choate, behind all-time leader Mike Myers at 206.