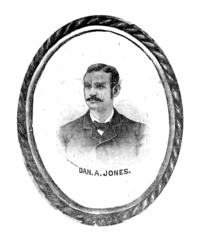 Prior to 1883, nobody from Yale University had come to the majors, but in 1883 four different Yalies broke in. None of the four appeared after 1883. One of them, Al Hubbard, caught one of Jack's games for the Philadelphia team, making them the first Ivy League battery in the majors. There would not be another Yale battery until Craig Breslow and Ryan Lavarnway in 2012.

Jones was called "Jumping Jack" because of an unusual pitching delivery. After his year in major league baseball, Jones left to open up a dentistry practice. Source: The Baseball Rookies Encyclopedia.

Jones is called Jack (DA) Jones to distinguish him from his contemporary Jack (RL) Jones.

The Great Encyclopedia of Nineteenth Century Major League Baseball states that Jack went to both dental and medical school, and later opened up studios to teach voice training.