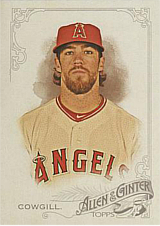 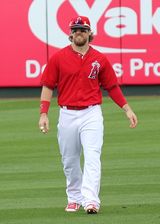 Collin was signed by the Arizona Diamondbacks and scout Matt Haas as a fifth rounder in 2008. He debuted with the club in 2011, going 0-for-8 in his first two games. After a rough start - hitting just .137 in 22 games - he hit his first homer against Cory Luebke of the San Diego Padres at home on August 28th. He went on to have a four-hit game, including his first career double, to bring his average into more respectable territory. He finished his first season with a batting line of .239/.300/.304 in 36 games. In his only postseason at bat in the NLDS, he hit a key two-run single off Randy Wolf of the Milwaukee Brewers while batting for Joe Saunders in Game 4, which the D-Backs went on to win, 10-6. After the season, he was included in a December 9th trade with the Oakland Athletics in which hurlers Trevor Cahill and Craig Breslow made their way to Arizona, while Collin, Jarrod Parker and Ryan Cook went to Oakland.

Cowgill played 38 games for Oakland in 2012, hitting .269 with a homer and 9 RBI. He did not play in the postseason, even though the Athletics won a surprising division title, as he spent a good chunk of the season in AAA with the Sacramento River Cats. In the Pacific Coast League, he hit .254 in 61 games with 4 homers and 37 RBI, also playing two games with the Class A Stockton Ports of the California League. After the season, on December 18th, he was traded to the New York Mets for Jefry Marte. He won the job as the Mets' 2013 center fielder in spring training and was the team's leadoff hitter on Opening Day on April 1st against the San Diego Padres at Citi Field. In storybook fashion, he doubled and scored in the 2nd and hit his first career grand slam off Brad Brach in the 7th as the Mets defeated the Padres, 11-2. But he could not keep it up and saw his playing time shrink accordingly. By mid-June, he was hitting only .173 in 21 games (52 at bats). On June 18th, he was designated for assignment when the Mets acquired Eric Young Jr. from the Colorado Rockies. He was then traded to the Los Angeles Angels of Anaheim for minor leaguer Kyle Johnson. He played 50 games for the Angels, hitting .231 with 2 homers and 8 RBI in 91 at bats.

In 2014, he was in competition in spring training with J.B. Shuck, who was coming off a solid rookie season, to be the Angels' fourth outfielder. He managed to win that competition to start the year with the team. The season proved his lengthiest big league look. Collin played 106 games, batting .250/.330/.354 with 5 home runs and 21 RBI. He began 2015 in a similar role but his bat was not up to the challenge, hitting only .183/.233/.290 in 55 games (69 at bats). The Cleveland Indians acquired him for the 2016 season and he made the team out of spring training, but after going only 1-for-12 in 9 games, his big league days were over.

He did continue to play, however, and spent 2017-2019 in AAA with three different teams. In 2020 he went to spring training with the Seattle Mariners, but never appeared with the major league club in the shortened COVID-19 season.

Cowgill became a manager with the Arkansas Travelers in 2021.