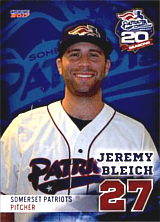 Jeremy Bleich pitched ten seasons in the minors before finally making it to the majors in 2018.

Bleich was drafted by the New York Yankees in the supplemental first round of the 2008 amateur draft. The 44th overall pick (between Wade Miley and Bryan Price), it was compensation for the loss of Luis Vizcaino in free agency. He was signed by scout Mike Thurman for $700,000 and made his pro debut that summer. He allowed two runs in three innings for the Staten Island Yankees, then had a strong winter for the Waikiki Beach Boys of the Hawaii Winter League, going 3-2 with a 1.77 ERA. He tied for third in the league in wins, was 7th in strikeouts (33) and was 7th in ERA. He joined Satoshi Nagai and Kyle Bloom as the league's All-Star starting pitchers.

Pitching for Israel and around the minors[edit]

Bleich joined the Israeli national team for the 2017 WBC Qualifiers. He relieved Jared Lakind in the 7th with a 1-0 lead against Brazil (defending its spot from the 2013 WBC). He went 1-2-3, retiring Bo Bichette then fanning Luis Camargo and Lucas Rojo. In the 8th, he retired Gabriel Maciel and whiffed Carlos Garmendia but then Leonardo Reginatto and Dante Bichette Jr. singled; Ryan Sherriff relieved and escaped the jam. In the finale against the United Kingdom, he relieved Josh Zeid with a 6-0 lead in the 8th and a no-hitter in progress. He retired Jordan Serena and Chris Berset but Albert Cartwright singled to end the no-hitter and advanced on an error by Zach Borenstein. Chavez Young singled in Cartwright to end the shutout. After a walk to Kyle Simmons, the Louisianan was relieved by Craig Breslow. Israel won to advance to the 2017 WBC.

He played for Israel in the WBC in March 2017, appearing in three games and allowing 3 runs (2 earned) on 5 hits in 2 1/3 innings. After the tournament, he was released by the Arizona Diamondbacks, who had signed him in the offseason, and was without a job. He contemplated finding another line of employment like real estate or medical equipment sales, but instead decided to give another try in independent ball, back with Somerset. After a couple of scoreless appearances in April, he managed to land another job in organized baseball, this time in the Los Angeles Dodgers organization, going 5-3, 3.22 in 31 games for the Oklahoma City Dodgers, and 0-1, 6.17 for the AA Tulsa Drillers, recording 3 saves between the levels.

In 2018, Bleich joined another organization, signing with the Oakland Athletics. He began the season with the AAA Nashville Sounds, where he was solid in an unglamorous middle relief role, pitching 27 times and going 1-1, 3.00 with a save. On July 13th, he finally received the long-awaited call to the bigs, replacing Josh Lucas on the A's major league roster. He made his debut that evening, entering a sticky situation in the 9th against the San Francisco Giants after Ryan Dull loaded the bases with nobody out. Ryan Buchter would normally have been the one summoned, but he was unavailable after working the previous two games. Things did not go great, as Jeremy was tagged by Steven Duggar, himself in his first week as a major leaguer, for a two-run double, and then hit Brandon Belt with a pitch, exiting without having retired anyone but happy to have finally made it. Both runners eventually came in to score as Oakland lost, 7-1. He made one more appearance, on July 20th, also against San Francisco, during which he recorded his first strikeout - Ryder Jones - after giving up a double to Pablo Sandoval; he then gave way to J.B. Wendelken, finishing the season with an ERA of 54.00.

He bounced around the 2019 season. Signing with the Phillies again after becoming a free agent in November 2018, he was released at the end of spring training and caught on with the Boston Red Sox organization. He split his time between short-season Lowell and Triple A Pawtucket before being dealt to the Minnesota Twins organization for cash considerations in July. He logged 13 1/3 innings and 17 strikeouts with Triple A Rochester before electing free agency after the season.