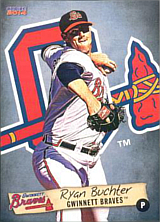 Ryan Buchter is an oft-used lefty relief weapon who reached the big leagues in 2014.

Ryan was on the Braves' Opening Day roster to begin 2014, but was optioned to Gwinnett before appearing in a major league game. He was called back on June 20th, when he made his debut in the 12th inning of a game against the Washington Nationals; he pitched a scoreless inning, walked a batter, and was credited with the win when the Braves scored a couple of runs in the top of the 13th. It was his only appearance of the season, and the only one of his career for the Braves. He spent the rest of the year at Gwinnett, going 3-3, 3.29 in 49 games with a save. Before the 2015 season, he signed as a free agent with the Los Angeles Dodgers. He had no record and a 1.65 ERA with 3 saves in 27 games for the Oklahoma City Dodgers. In spite of that solid work, he was released on June 20th and it took over a month for him to find another team. The Cubs took him on board for a second time and he went 2-0, 2.00 in 16 games for the Iowa Cubs. He followed with another excellent performance in the winter leagues, when he was 3-0, 0.72 with 10 saves for the Tomateros de Culiacan in the Mexican Pacific League.

The San Diego Padres took notice of his success and finally gave him a chance to pitch in the majors in 2016. In 67 games in relief, he was 3-0, 2.86 with a save and 78 strikeouts in 63 innings. In 2017, he was 3-3, 3.05 in 42 games for San Diego when, on July 24th, he was included in a six-player trade with the Kansas City Royals. Heading with him to the Midwest were fellow pitchers Trevor Cahill and Brandon Maurer, in return for pitchers Matt Strahm and Travis Wood and minor league infielder Esteury Ruiz. Buchter pitched well for the Royals, going 1-0, 2.67 in 29 games, but the team fell short in its bid to make the postseason. They decided to re-tool after the season, forced by the departure of several key players via free agency, and, on January 29, 2018, he was traded to the Oakland Athletics alongside designated hitter Brandon Moss in return for pitchers Jesse Hahn and Heath Fillmyer. He put together two solid seasons in Oakland, with a 6-0, 2.75 mark in 54 games in 2018 and a 1-1, 2.98 mark in 64 games in 2019, working as the team's lefty specialist. With MLB set to enforce a three-batter minimum for pitchers beginning in 2020, Buchter was non-tendered on December 2, 2019, waiting until February to sign with the Los Angeles Angels.