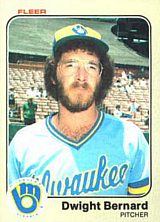 Pitcher Dwight Bernard was drafted by the New York Mets in the second round of the 1974 amateur draft and reached the majors with the club in 1978. He spent most of that year and the next as a member of the Mets bullpen. After the 1979 season, he was traded to the Milwaukee Brewers, but he did not get back to the majors until late in the 1981 season. The following year, he saw his most playing time in the bigs and pitched an inning in Game 6 of the World Series. However, he was released by the Brewers the following spring. He spent 1983 and 1984 in the Houston Astros farm system and played in the Baltimore Orioles organization in 1985. In 1986, he began his coaching career.