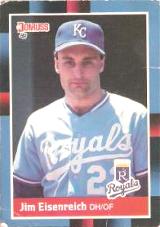 He is the player from St. Cloud State University with the most major league at-bats.

He was drafted only one round after his college teammate, shortstop Bob Hegman, was drafted by the Kansas City Royals. Though Eisereich had a successful major league career, Hegman made only one appearance in the big leagues, and never saw an at-bat, as a defensive replacement on the World Series winning 1985 Kansas City Royals.

He made his big league debut with the Minnesota Twins in 1982. He hit .303 with the Twins, but was placed on the disabled list when he began suffering symptoms of Tourette's Syndrome, which were not properly diagnosed at the time. He struggled for two years to overcome the disorder but retired in 1984. However, the Kansas City Royals eventually signed him, and he returned to the major leagues in 1987. He was greatly helped when he received medical attention for his condition. There was some doubt whether Eisenreich would be able to perform at a major league level in light of the medication he was required to take, but he proved the doubters wrong. He homered in two different World Series. He retired after the 1998 season with a career batting average of .290.