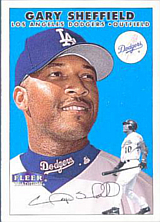 Gary Sheffield is the nephew of Dwight Gooden. Gooden and Sheffield are also neighbors, living on the same block in Tampa, Florida. Sheffield was a highly touted "can't miss" prospect from the time he was in high school. 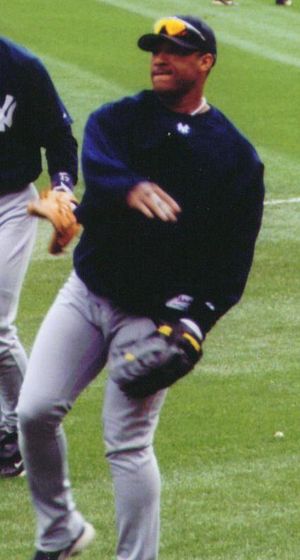 First signed as a 1st round pick in the 1986 amateur draft by the Milwaukee Brewers and scout Jim Gabella and scouting director Dan Duquette, he was considered to be Robin Yount's successor as the team's big star, but things did not work out well. Sheffield became unhappy with playing conditions for the Brew Crew and later confessed that he deliberately committed errors in order to be traded to some other team. He was named The Sporting News Player of the Year in 1992 after a breakout year with the San Diego Padres. After helping the 1997 Florida Marlins win the World Series, he was traded to the Los Angeles Dodgers in 1998 as part of the Marlins major payroll reduction. He had earlier also been traded during the Padres' fire sale of 1993. One of the players acquired by the Padres in the 1993 trade was Trevor Hoffman, one of the greatest relievers in major league history, who remained with the San Diego Padres through the 2008 season. When Sheffield was traded by the Marlins in 1998, they received Mike Piazza in return, but the great catcher was only a Marlin for a week.

Sheffield had an odd batting stance in which he violently shook the bat back and forth. He swung very hard yet amazingly, he did not strike out much. He had great power and could hit for average while drawing walks. Originally an infielder, he was moved to the outfield and in his prime was average in the field, though he had a very strong but not always accurate arm. He became a full-time designated hitter around 2006, as his fielding skills eroded with age.

Sheffield created a stir in 2007 when he claimed in a GQ interview that the number of African-American players was declining because Hispanic players are easier for "The Man" to control whereas American black players demand more respect.

Sheffield hit 19 home runs in 2008 for the Detroit Tigers to finish the season with 499 career home runs. Sheffield hit the official 250,000th home run in MLB history on September 8th of that year. In fine fashion, it was a grand slam, the 13th of his career. 12 years earlier on the same date, Sheffield hit the home run that established 1996 as the top home-run season ever (to that point). His career achievements have been somewhat clouded as a result of playing during baseball's "Steroid Era".

He was unexpectedly released (with $14 million remaining on his contract) towards the end of spring training in 2009, and was picked up by the New York Mets to be used as a reserve outfielder and pinch hitter. Sheffield hit his 500th major league home run (making him the 25th player to join the "club") for the Mets on April 17th as a pinch hitter in the 7th inning at Citi Field, off relief pitcher Mitch Stetter of the Milwaukee Brewers. He was the first player to hit his 500th home run as a New York Met. Duke Snider and Eddie Murray had hit their 400th home runs while wearing the Mets' uniform. Ironically, the Brewers were his original team, but they then played in the American League. Sheffield, in 1988, hit the first teenage home run since Robin Yount in 1975, who also did it with the Brewers (who switched from AL to NL in 1998).

Sheffield became only the third major league player to hit one or more home runs as a teenager and as a 40+ year old, joining Ty Cobb (1927) and Rusty Staub (1984). Staub also had hit his home run as a 40-year old while playing for the New York Mets.

For a player of his accomplishments, he did poorly in voting for the Hall of Fame at first: he received only 11.7% of the vote in his first year of eligibility in 2015 and failed to move up at all in 2016. In 2017, he was still at 13.3%, and at 11.1% in 2018. He was not the only player to suffer from a succession of very strong ballots: Jeff Kent, Larry Walker and Fred McGriff were suffering the same fate. Many analysts were pointing out three elements working against him: the bulk of his hitting accomplishments came in a high-offense era; he was one of the players tainted by allegations of PED use (his name was in the Mitchell Report); and his defensive play was well below average. In 2019, when others in his situation started to move up, some quite significantly, he remained stalled at 13.6%, but in 2020, he jumped up all the way to 30.5% and in 2021 he took another big step forward, to 40.6%.

Despite declarations to the contrary, he is not the uncle of Justus Sheffield. [1]. He has worked as a player agent in retirement, representing Jason Grilli, and as an analyst for MLB on TBS.