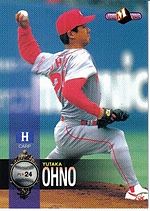 Yutaka Ono pitched for the Hiroshima Carp for 22 years. He led the Central League in both shutouts and saves during his career, made 10 All-Star teams and won awards as his league's top pitcher and top reliever.

Ono improved further in his 12th season with Hiroshima, in 1988. He was 13-7 with a 1.70 ERA, the first sub-2 ERA in the Central League in 13 seasons, since Sohachi Aniya. He became the 77th man in Nippon Pro Baseball history to reach 1,000 strikeouts and made his 6th All-Star team. He easily led the league in ERA, by .46 over Hiromi Makihara. He tied Makihara for the most shutouts (4) and tied Bill Gullickson for the most complete games (14). He struck out 183 in 185 innings, four K's fewer than league leader Makihara. He won the Sawamura Award as the top pitcher in NPB but failed to make the Best Nine in the CL, surprisingly, as Kazuyuki Ono was chosen instead at pitcher.

After retiring as a player, Ono was the pitching coach for Hiroshima for one year, then became a broadcaster for NHK. He returned to coaching with the Japanese national team, working the 2004 Olympics, 2007 Asian Championship and 2008 Olympics.

He was elected to the Japanese Baseball Hall of Fame in 2013 along with Yoshiro Sotokoba and Kazuo Fukushima.