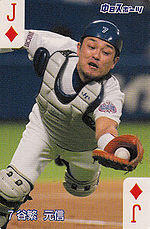 One of Japan's most durable and top defensive catchers for a couple decades, Motonobu Tanishige has never been considered a top star due to his lack of contact hitting. An occasional power threat later in his career, he only made one Best Nine in over 23 years.

In 2001, the veteran had a .262/.367/.447 year with 20 homers, the most on the club. He made his 4th straight All-Star team and fifth overall. A free agent, he sought to come to the USA but got no offers and signed with the Chunichi Dragons instead.

During 2011, the 40-year-old batted .256/.349/.357, better than most of the Dragons' starters. He fielded .998 and won his 5th Gold Glove. The old-timer finished fifth in voting for the 2011 Central League Most Valuable Player Award, behind Takuya Asao, Kazuki Yoshimi, Tetsuya Utsumi and Hisayoshi Chono (the only position player ahead of him). He fizzled in the 2011 Japan Series, going 0 for 23 with 8 strikeouts and no walks as the Dragons lost to the Softbank Hawks in seven games. He was 0 for 40 overall for that postseason. He broke Daijiro Oishi's record for most consecutive hitless at-bats in a Japan Series.