Note: This page links to major leaguer Takashi Saitoh. For the amateur pitcher of the same name, click here. 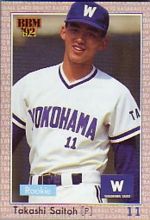 Takashi Saitoh became a pitcher as a sophomore in high school. He went 15-3 in college with a 1.42 ERA. Following that performance, he was drafted in the first round of the 1991 NPB draft by the Yokohama Taiyo Whales. He debuted with Taiyo the next season, going 0-2 with a 8.44, but he did strike out 21 in 16 innings of work. In 1993, the 23-year-old hurler entered the club (now known as the Yokohama BayStars) rotation and went 8-10, 3.81. 1994 was a fairly productive season at 9-12, 3.13, 8th in the Central League in ERA and earning an All-Star spot. On the other hand, he led the league in losses (his 12 were the second-lowest total by a CL leader to that point). In '95, Takashi went 8-9 with a 3.94 ERA. In one contest, he carried a no-hitter into the 8th inning but Katsuyuki Dobashi homered and Saitoh lost the outing 1-0.

Again trying his luck in MLB, he caught on with the Los Angeles Dodgers. Saitoh went 6-2 with a 2.07 ERA for the Dodgers in 2006, and led all MLB relievers with 107 strikeouts in 78 innings pitched.

Saitoh opened the 2007 season as the Dodgers closer. He left a June 3rd game against the Pittsburgh Pirates with left hamstring tightness and missed several contests. Still, he made the All-Star team and finished the year with over 30 saves and was back in the same role in 2008. However, he was injured again, and Jonathan Broxton took over for him, pitching very well. As a result, Saitoh had to look for another team and found a job with the Boston Red Sox in 2009, pitching in the late innings when one of the team's other relievers was not available. He was used a few times to close games when Jonathan Papelbon was unavailable and recorded a couple of saves while going 3-3, 2.43 in 56 games.