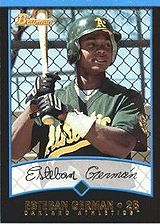 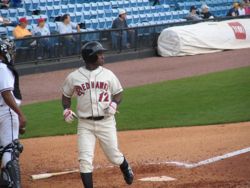 Esteban German was an all-purpose utility player who appeared at every position except pitcher, catcher and right field. He was most commonly at second base (152 games) and third base (106 games).

German played in ten seasons in the majors, getting most of his at-bats with the Kansas City Royals. His most notable season was 2006, when he posted a line of .326/.422/.459 in 106 games for the Royals. In his final major league season, 2011, he played only 11 games for the Texas Rangers, going 5 for 11, but made the lone postseason appearances of his career, going 0 for 3 in 3 World Series games against the St. Louis Cardinals.

German was signed by scout Santiago Villalona for the Oakland A's in 1996. He made his pro debut the next summer with the DSL Athletics East. German spent eight seasons in the minors before coming to the majors for good. He usually hit over .300 and had on-base percentages around .400. He was also a minor league basestealer, with a high of 83 in 2000. Most of his minor league career was spent in the Oakland Athletics organization. He has also played in the Dominican League.

Signing with the Seibu Lions for 2012, he played center field and hit leadoff on Opening Day. He went 1 for 4 against Yuki Saito in a loss to the Nippon Ham Fighters.