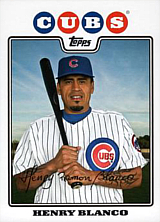 Henry Blanco was regarded as one of the top defensive catchers in MLB during his sixteen-season career. Despite his fine glovework, he only appeared in more than 100 games twice (2001 with the Milwaukee Brewers and 2004 with the Minnesota Twins), seeing most of his action as a valuable backup or third catcher option. Johan Santana credits Henry as a valuable component of his 2004 AL Cy Young win, when he stepped in for an injured Joe Mauer and posted career bests in home runs (10) and RBI (37) while throwing out an American League-leading 49.2% of baserunners as the Twins cruised to an AL Central crown. He finished his career at 42 in a split season with the Toronto Blue Jays and Seattle Mariners in 2013.

Blanco was in spring training as a catcher with the Arizona Diamondbacks in 2014, but when he failed to make the team, he was offered a job as a coach with the major league squad. In 2015, he moved to the Chicago Cubs as a special coach in charge of "quality assurance" on Joe Maddon's staff. He became the Washington Nationals bullpen coach in 2018.

Henry was the backup catcher for the Venezuelan national team in the 2009 World Baseball Classic. In the first round seeding game against Team USA on March 11th, he stunned everyone by blasting a home run off his Chicago Cubs teammate, Ted Lilly, and followed with a double off Jeremy Guthrie and a single off Brad Ziegler. For good measure, he threw out Derek Jeter attempting to steal second in the bottom of the 9th to preserve a 5-3 Venezuelan win.