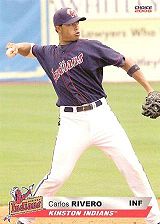 Infielder Carlos Rivero was signed for $100,000 by the Cleveland Indians organization out of Venezuela in 2005 and made his pro debut with the DSL Indians 1 that summer. He made it to the United States in 2006, when he played for the GCL Indians and Burlington Indians, putting up a batting line of .260/.314/.350 in 53 games. He moved up to the Lake County Captains in the South Atlantic League in 2007, playing 115 games as the team's starting shortstop and hitting .261 with 26 doubles and making the mid-season All-Star team. In 2008, he hit .282 in 108 games for the Kinston Indians in the Carolina League. Rivero made it to AA in 2009, spending that season and 2010 as the starting shortstop for the Akron Aeros in the Eastern League. He hit .242 in 132 games the first year, and .232 in 110 games the second, with a poor on-base percentage and declining power. At that point, the Indians placed him on waivers, from which he was claimed by the Philadelphia Phillies, who placed him on their major league roster.

In the Phillies' organization in 2011, Rivero played much better in his third season in AA. With the Reading Phillies, he hit .275 in 139 games, with excellent power after being switched to third base: he hit 36 doubles and 15 home runs. He also got a first look at AAA, playing 10 games with the Lehigh Valley IronPigs where he hit .185, but with 4 extra base hits in 7 games. After the season, the Phillies dropped him from the 40-man roster after the Rule V draft when they re-signed SS Jimmy Rollins as a free agent and needed a spot for him. The Washington Nationals immediately claimed him off waivers on December 21st.

On December 6, 2018, playing in the Venezuelan League for the Cardenales de Lara, he was driving home from a game when his vehicle hit a rock. Two teammates who were on board, Jose Castillo and Luis Valbuena, both died in the accident, but Carlos survived. The obstacle had been placed on the road by highway robbers with the intent of causing a crash and then robbing the passengers. Four men were arrested the next day and charged with the crime.