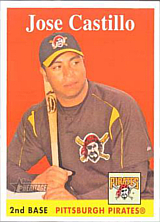 José Castillo was an infielder who played in the major leagues, Japan, Venezuela, Taiwan and Italy.

José struggled in 2001 with the Lynchburg Hillcats, hitting .245/.288/.359 and going 23 for 33 in steals. He tied Javier Colina for the Carolina League lead in triples (7) and led league shortstops in putouts (220) and double plays (85). In winter ball, he hit .280/~.329/.408 for the Caracas Lions. Returning to Lynchburg, he had a big year, batting .300/.370/.452 with 82 runs scored, 81 RBI, 16 homers and 27 steals (in 41 attempts). He led Carolina League shortstops in putouts (245), assists (402) and double plays (92) and tied Hector Luna for the error lead (33). He was 10th in average and made the league All-Star team at shortstop. Baseball America rated him the 7th best shortstop prospect in baseball and the 2nd best Carolina League prospect behind teammate Sean Burnett. They also rated him having the best infield arm in the Carolina League and said he was the league's most exciting player. Castillo followed his fine 2002 with a fine winter season. He batted .327/~.365/.551 and led the Venezuelan Winter League in runs scored (28) and tied for the lead in triples (4). He was only 3 RBI behind leader Robert Perez by driving in 27 and his 8 homers were two shy of leader Rob Stratton. Baseball America rated him the 2nd best prospect, behind only Miguel Cabrera. In 2003, José produced at a .287/.339/.390 clip and went 19 for 29 in steals. His strikeout rate kept falling and he only whiffed 81 times while drawing 40 walks. On the other hand, his power fell off drastically as he only went deep five times. He played for the World team in the 2003 Futures Game, batting 9th and going 0-for-2 with an error playing shortstop. Baseball America ranked him the 20th best prospect in the Eastern League. He hit .255/~.335/.421 in winter play for Caracas and was ranked the 10th best prospect in the VSL according to Baseball America.

Pittsburgh had a gaping hole at second base from 2000 through 2003 and Castillo was given the job out of spring training in 2004. As a rookie, he hit .256/.298/.368, not much, but he was only 23 and showed some power and defensive skill. José had a great winter season in 2004-2005. He batted .364/~.409/.598 with 41 runs scored (4 off of the league lead), 10 homers and 38 RBI in 214 at bats for Caracas. He was second in the league in average, fourth in home runs and tied for third in RBI. He struggled with injuries in 2005, missing about a month with a strained left oblique and then tore the MCL of his left leg when Hector Luna spiked him during a double play. Between the injuries, José batted .268/.307/.416 for a decent 87 OPS+ (for a middle infielder) with solid defense. He scuffled to a .253/.299/.382 line in 2006. His defense was worse by all accounts and there was some speculation Pittsburgh would move him off second base in the future. It was an overall bad year for Pittsburgh's defense as shortstop Jack Wilson also was a huge disappointment with the glove. Some of the concern was directed to the fact that Castillo had bulked up significantly in the past several years, yet his OPS was down. In late May, he homered in five consecutive games. After a .279/.334/.443 first half, he slipped to .216/.248/.296 in a miserable second half. He hit 11 first-half homers and 3 in the second half. There was speculation Pittsburgh might trade him and move Freddy Sanchez to second full-time but no move materialized. He seemed to bounce back well in winter play, hitting .308/.389/.471 with more walks (26) than strikeouts (21) and 40 RBI, tied for fourth in the VWL. He also began seeing time in the outfield. In the 2007 Caribbean Series, he hit a fine .321/.345/.536 with 6 doubles in six games. Unfortunately, he had three errors in right field.

In January 2007, Castillo became the target of criticism from his double play mate, Wilson. Jack said "Freddy is my second baseman, in my mind. He's the guy I can trust to [...] get the job done. Castillo's got to show me something." Some in the Pittsburgh media seconded Wilson's remarks in that Castillo needed to show he could live up to his potential. Castillo showed up in spring training in 2007 significantly lighter. He said he lost 10 pounds thanks to a workout regimen and winter ball; manager Jim Tracy said it appeared he dropped 20 pounds. In the first infield drills of training camp, Castillo was placed at third base with the "B" group, raising many questions. He hit about as well as Jose Bautista in spring training and, with about a week left in camp, Tracy named Bautista the starter at third with Freddy Sanchez moving to second and Castillo being moved to the bench. Sanchez was soon placed on the disabled list, leaving Castillo the Opening Day second baseman once again by default. But Sanchez assumed the starting role when he returned to the lineup later in April. Castillo did not perform well in limited opportunities, posting a batting line of .242/.283/.330 in the first half of the season. With the Pirates' acquisition of infielder Cesar Izturis in July, Castillo was relegated to sixth infielder status. He hit .244/.270/.335 in 87 games that season. After his powerful winter in Venezuela, he failed to hit a home run. Pittsburgh released Castillo on December 6 and, three weeks later, he signed with the Florida Marlins. Castillo responded with another big winter, hitting .386/.412/.623 for Caracas with 9 homers and 41 RBI in 51 games. The power was especially surprising since he had zero in the MLB season. He was 4th in home runs, second to Eliezer Alfonzo in RBI and led the league in average, 41 points over runner-up Gregor Blanco.

Late in spring training in 2008, Castillo was waived by the Marlins and picked up by the San Francisco Giants. Due to the loss of Kevin Frandsen for the year, Castillo was appointed San Francisco's starting third baseman to open the season. José snapped his homerless drought at 450 at bats on April 30th; his previous had came mid-August 2006. Castillo hit .244/.290/.381 with 28 doubles for the 2008 Giants, for a 74 OPS+, while playing okay defense at third base. He was waived again in August and picked up by the Houston Astros. He batted .281/.314/.313 in 15 games for Houston, his final big league action.

Castillo did not play for the first month of the 2009 season. The Uni-President Lions of Taiwan signed him in May to replace another ex-MLBer at third base, Rico Washington. His 487 MLB hits were the most by any player signed by the Lions, breaking Andujar Cedeno's record by two. In his Chinese Professional Baseball League debut, Castillo homered off Chih-Chia Chang. He hit .314/.356/.499 for the Lions with 13 home runs in 73 games, but also with 17 errors. Castillo parlayed his fine CPBL campaign into a trip to Japan, signing with the Yokohama BayStars for 2010. He debuted for Yokohama on Opening Day, March 26th, hitting sixth and playing second base, going 0-for-3 against the Hanshin Tigers. He would spend 2011 with the Chiba Lotte Marines, hitting .271 with 24 homers and 89 RBI in his two seasons there.

Castillo and fellow major leaguer Luis Valbuena were killed in a car accident in Venezuela on December 6, 2018. Carlos Rivero was driving the car but survived the accident. All three were teammates with the Cardenales de Lara in the Venezuelan League. Their vehicle hit a rock that had been placed in the road by highway robbers in order to cause an accident and steal the victims' belongings; four men were arrested the next day in connection with the crime.