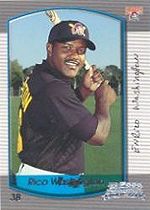 Rico Washington was a minor league veteran with over 4,000 professional at bats when he made his major league debut with the St. Louis Cardinals in 2008. He took the place of an injured Brendan Ryan on the roster.

Washington was drafted in the 10th round of the 1997 amateur draft by the Pittsburgh Pirates. He was taken by the San Diego Padres in the AAA phase of the 2002 Rule V Draft, and spent 2003 in AA and AAA.

Washington signed with the Uni-President Lions for 2009 and manned shortstop on Opening Day. Hitting second, he went 1 for 3 with a double and a RBI in a 5-1 win. In 19 games, he hit .297/.376/.459. Despite this strong performance, he was released in favor of Jose Castillo. Team officials blamed an injury, which Washington denied.