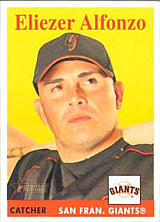 Eliezer Alfonzo was the Venezuelan League MVP in 2007 but had his name tarnished shortly thereafter. In April 2008, it was revealed Alfonzo tested positive for use of a banned performance-enhancing substance; he was suspended 50 games. Alfonzo said "I made a mistake and I want to apologize to my family, my teammates, the fans and the Giants organization." Alfonzo was suspended 100 games for a second violation in 2011. Marlon Byrd, Jenrry Mejia, Manny Ramirez and Guillermo Mota are the only other major leaguers to test positive multiple times, but Alfonzo's suspension was dropped on May 14, 2012, after 48 games, because it was tainted by the same issues that led to the dismissal's of Ryan Braun's suspension. That decision was the last straw that led to the firing of arbitrator Shyam Das after 13 years on the job.