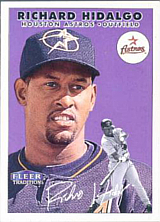 Again showing off his power with the New York Mets in 2004, Hidalgo hit 8 home runs in his first 16 games with the team, including 5 home runs against the New York Yankees. He set the Mets record by homering in five straight games from July 1st to July 5th - and he had not even been a Met for three weeks.

The Houston Astros, fearful of losing him, protected Richard over a lesser regarded young outfielder in advance of the 1997 expansion draft. That other outfielder was Bobby Abreu, who ended up with the Philadelphia Phillies (by way of the Tampa Bay Devil Rays) and whose career ended up eclipsing Richard's by quite some margin.