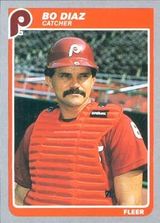 BO IS DI-AZZLING - headline in the Philadelphia Daily News

Bo Díaz, signed as a free agent out of Venezuela, languished behind Carlton Fisk in the Boston Red Sox organization in the mid-1970s. After spending most of eight years in the minors, he became the Cleveland Indians' starting catcher in the early 1980s, and an All-Star in the strike-distorted 1981 season, largely on the basis of a .313 batting average (in fewer than 200 at bats). The rebuilding Philadelphia Phillies gave up Lonnie Smith in a three-cornered trade to acquire Diaz, who replaced Bob Boone in their lineup. He was Caribbean Series MVP in 1982, which he led in average (.412) and homers (2) for the champion Leones del Caracas. He would be inducted into the Caribbean Baseball Hall of Fame as part of the 2019 class.

Díaz was a solid catcher for the next two seasons with Philadelphia, though always an erratic hitter. He also started for Cincinnati later in the decade, making another All-Star team in 1987. He made his only postseason appearance with the Phillies in 1983, going 5 for 15 in a losing cause in the World Series against the Baltimore Orioles.

Díaz is best remembered for cult accomplishments, including throwing out Robby Thompson on four stolen base attempts on (June 27, 1986) and hitting a two-out walk-off grand slam to turn a 9-6 deficit into a 10-9 Phillies win over the New York Mets on April 13, 1983. Diaz held the Venezuelan League home run record for over 30 years, the first player to do so. He drilled 20 homers for the 1979-1980 Leones del Caracas to break Bobby Darwin's seven-year-old mark of 19. He was the first Venezuelan to hold the record since Vidal López had a share of it with 9 in 1949-1950; in 1950-1951, it transferred to American or Cuban hands until Bo came along. Alex Cabrera finally topped Bo's mark in 2013-2014.

Díaz died in 1990 when a satellite dish he was installing at his Caracas home fell and crushed him.