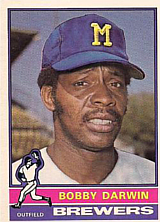 Bobby Darwin spent many years trying to make the majors as a pitcher before successfully converting to being an outfielder.

Before the 1962 season, southern California native Bobby Darwin was signed by the Los Angeles Angels as an amateur free agent. His first season of professional baseball saw him with the Class C California League San Jose Bees. The 19-year-old pitcher appeared in 26 games, won 11 of them and lost 6 with a 4.12 ERA. Darwin made his major league debut with the Angels in the final game of the 1962 season. He pitched poorly, yielding eight hits and four walks in 3 1/3 innings and was charged with the loss. On May 15, 1963, he was selected off waivers by the Baltimore Orioles from the Angels as a first-year waiver pick.

Bobby made it back to the major leagues at the start of the 1969 season with the Dodgers, but once again failed to impress as a pitcher, registering a 9.82 ERA in three relief appearances. He was sent down to Triple A Spokane, but was just as bad, with an 0-6, 6.49 mark in 17 games. Facing a career crossroads, Darwin decided to become a position player. Instead of trying to challenge hitters, he was going to challenge pitchers. Unlike most players who attempt that difficult switch, he had not been particularly successful as a hitter in the minors, failing to even hit .200 in his previous three minor league seasons. Still, he went back to the California League (which had become a Class A league following the reorganization of the minor leagues a few years earlier), playing outfield for the Bakersfield Dodgers, where he hit .297 with 23 homers in 86 games. He skipped Double A altogether and was back at Spokane in 1971. There, he hit .293 in 91 games, with 13 doubles and 17 homers.

Darwin made it back in the big leagues by the middle of the 1971 season with the Dodgers. In 11 games, he collected 5 hits in 20 at bats, including his first major league home run, a pinch-hit three-run blast off Chicago Cubs left-hander Juan Pizarro. He went back to Spokane to finish the season, but it was clear that he had the ability to be a solid major league hitter. On October 22, 1971, the Dodgers traded Darwin to the Minnesota Twins for outfielder/catcher Paul Powell.

His career blossomed with the Twins as a right-handed hitting outfielder. During a three-year stretch from 1972 to 1974, he belted 22, 18 and 25 homers, while knocking in 80, 90 and 94 runs. On the rough side, he also led the American League in strikeouts with 145, 137 and 127 those same years. In the winter of 1972-1973, Darwin smacked 19 homers for the Navegantes del Magallanes to break Brant Alyea's Venezuelan League record by two; Bo Diaz would top Darwin's mark 7 years later. On June 14, 1975 he was traded by the Twins to the Milwaukee Brewers in return for Johnny Briggs.

Darwin played for the Brewers for almost a full year, then on June 3, 1976 they traded him, along with Tom Murphy, to the Boston Red Sox for Bernie Carbo. He had hit .247 with 8 homers in 55 games for Milwaukee in 1975, and was again hitting .247, with a single homer and 5 RBI when he was traded. He fared poorly for the Sox, falling to .179 in 43 games over the rest of the 1976 season. He was traded to the Chicago Cubs on May 28, 1977 for pitcher Ramon Hernandez. He had only appeared in 4 games for Boston, and would play only 11 more in Chicago to end his big league career. Darwin also appeared in 25 games for the Wichita Aeros; he was released by the Cubs on August 23rd. In 1978 he played for the Alijadores de Tampico.

In 1983, Darwin became a Los Angeles Dodgers scout, a role he still held as of 2011. He has signed Nick Buss, James McDonald, John Richy, Trayvon Robinson and Angelo Songco among others.

His grandson, Andrew Darwin, was selected in the 2008 amateur draft.