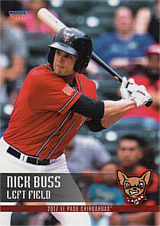 Buss was All-State as a high school senior. In junior college, he hit .382 to lead his squad as a freshman. The next year, the Los Angeles Dodgers took him in the 35th round of the 2006 amateur draft, but he pressed on to USC instead. Nick hit .290/.378/.393 as a junior then, with the Peninsula Oilers, he led the Alaska Baseball League that summer in triples (5), steals (29) and average (.369), making the league All-Star team. His senior year at USC, Nick produced at a .296/.415/.472 clip with 51 runs scored and 16 steals (in 23 tries) over 56 games. He tied Brett Wallace for 4th in the Pac-10 in swipes but led in times caught stealing. The Dodgers, still interested, chose him in the 8th round of the 2008 amateur draft; the scout was former big leaguer Bobby Darwin. The next three players selected also played in the majors: Erik Komatsu, Evan Crawford and Brett Oberholtzer.

The Michigan native hit .272/.328/.411 with 10 triples and 70 runs scored for the 2012 Chattanooga Lookouts. He tied Hak-Ju Lee for third in the Southern League in triples (behind Jared Mitchell and Logan Watkins), tied Kyle Jensen for 9th in runs scored, 1st in sacrifice hits (19), was 3rd in times caught stealing (13, behind Josh Prince and Billy Hamilton, both of whom had many more steals than Nick's 19). He tied Elian Herrera for the most triples by a Dodgers minor leaguer while he also was 8th in runs scored, between Tim Federowicz and Blake Smith. He also registered 16 outfield assists while only making four errors. Buss hit .303/.363/.525 with 11 triples, 17 home runs, 84 runs scored, 100 RBI and 21 steals while only being caught twice for the 2013 Albuquerque Isotopes. He was among the LA minor league leaders in runs scored (2nd to Scott Schebler), doubles (tied for 4th with 29), triples (3rd behind Darnell Sweeney and Schebler), homers (tied for 5th with Chris Jacobs), RBI (1st, 9 ahead of Schebler) and slugging (second to Schebler). He was 4th in the 2013 PCL in slugging (after Corey Dickerson, Brock Peterson and Wilmer Flores), 1st in RBI (11 more than Michael Choice and Ryan Wheeler), 2nd in triples (3 behind Dickerson), third in total bases (241, after MVP Chris Owings and Peterson) and 6th in runs scored. He made the PCL All-Star outfield alongside Dickerson and Choice.

The Dodgers made Nick a September call up in 2013. In his major league debut, September 14th, he replaced Carl Crawford early in a 19-3 blowout loss to the San Francisco Giants. Pinch-hitting with LA already down 8-1 in the 3rd, he flew out against Tim Lincecum then stayed in the game to play left field. He singled off Lincecum in the 5th for his first major league hit and grounded out while facing Heath Hembree in the 7th to end the day 1-for-3. Nick was 2-for-19 (.105) in his first taste of the bigs, then did not return until 2016, when the Los Angeles Angels of Anaheim gave him a look in August. He had already matched his career hit total after two games, and on August 15th, he collected his first career RBI when his opposite field double off Felix Hernandez of the Seattle Mariners drove in Cliff Pennington in the 1st inning. He hung around for 36 games with the Halos, hitting .198 in 81 at bats. He was last seen playing for the Rochester Red Wings of the Minnesota Twins chain, released in June 2018.