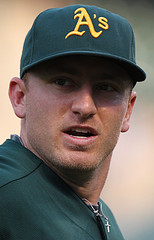 Shortstop Cliff Pennington was selected by the Oakland Athletics in the first round of the 2005 amateur draft. He was signed by scout Blake Davis and made his pro debut that summer with the Kane County Cougars, where he hit .276 and stole 25 bases. He began 2006 with the Stockton Ports but struggled, hitting just .203 in 46 games. He ended the season with the AZL Athletics, where he did much better, getting 13 hits in 28 at-bats. he then split 2007 between Stockton and the Midland RockHounds of the Texas League, hitting a combined .253 in 138 games while playing almost exclusively at shortstop.

Pennington started at second for the USA in the 2008 Futures Game, hitting second behind Andrew McCutchen. He went down on strikes in the 1st inning against Carlos Carrasco. In the 4th, he popped out while facing Eduardo Morlan. He started that season with Midland, then was promoted to the AAA Sacramento RiverCats, hitting a combined .280 in 115 games. Later that summer, he was called up by the Athletics and made his debut on August 12, 2008. He played 36 games that first year, hitting .242, and then 60 games in 2009, when he hit .279. He also played 99 games for Sacramento in 2009, hitting .264. In 2010, he became the A's starting shortstop, logging 156 games and getting 508 at-bats. He hit .250 with 6 homers and 46 RBIs, also slugging 26 doubles and 8 triples and scoring 64 runs. He followed that with a similar season in 2011, when he played 148 games, hit .264, with 26 doubles, 8 homers and 58 RBIs. However, he slumped in 2012, falling to a .215 batting average in 125 games, with 18 doubles, 6 homers and 28 RBIs. The A's decided to look for another starting shortstop, acquiring Stephen Drew on August 20th, while Cliff played mainly second base down the stretch. That's where he played in the ALDS, when he went 4 for 14 with a run and an RBI in the A's loss to the Detroit Tigers. It was his first taste of postseason play.

Pennington was traded to the Arizona Diamondbacks on October 20, 2012, as part of a three-team trade. The A's sent Yordy Cabrera and Cliff to the Miami Marlins. The Marlins then sent him, reliever Heath Bell, and cash to the Diamondbacks. The Diamondbacks sent Chris Young and cash to the A's to complete the deal. He was a part-time player for Arizona in 2013 and 2014, as youngsters Didi Gregorius and Chris Owings were the main shortstops and Aaron Hill got most of the playing time at second base. He hit .242 in 96 games the first season, then .254 in 68 games the second year, when he was limited to 177 at-bats. Gregorius was traded after the 2014 season, but in turn another youngster, Nick Ahmed, came up from the minors and got regular playing time, so Cliff played sparingly again in the first half of 2015, hitting .237 in 135 at-bats.

On August 8, 2015, he was traded to the Toronto Blue Jays in return for minor leaguer Dawel Lugo. The Jays had just learned that rookie second baseman Devon Travis would need to stay on the disabled list for a while and wanted some infield insurance. While he played sparingly in his first month with the team, his presence became key when SS Troy Tulowitzki hurt a shoulder bone in the first game of a doubleheader against the New York Yankees on September 12th. He took over at second while Ryan Goins moved over to shortstop and contributed some excellent defence and a key hit-by-pitch as the Jays won the game in extra innings; he then hit a two-run homer off Ivan Nova in the 2nd game that set the tone for a sweep of the twinbill. With Tulowitzki out for a couple of weeks or more, he was expected to see regular action until the end of the regular season, and perhaps in the postseason as well. He made history in Game 4 of the ALCS against the Kansas City Royals on October 20th, becoming the first position player to pitch in a postseason game. The Blue Jays were trailing 12-2 and he pitched the 9th inning, allowing a couple more runs in a lost cause. It was his first pitching appearance as a professional. On November 17th, he became the first major league free agent to sign with a new team when he inked a two-year deal with the Los Angeles Angels of Anaheim, where he was slated to back-up SS Andrelton Simmons and 2B Johnny Giavotella.

He spent a couple of seasons as a back-up infielder with the Angels in 2016 and 2017, hitting .209 and .253 in 74 and 87 games. He provided the Angels exactly what they were expecting: the ability to play second and short, and occasionally third base, with good defensive work and minimal production with the bat. In 2018, he moved to the Cincinnati Reds to play a similar role. On April 12th, he made his regular season pitching debut when he pitched the 9th inning of a 13-4 loss to the Chicago Cubs, allowing a run on 1 hit and 2 walks.