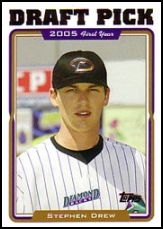 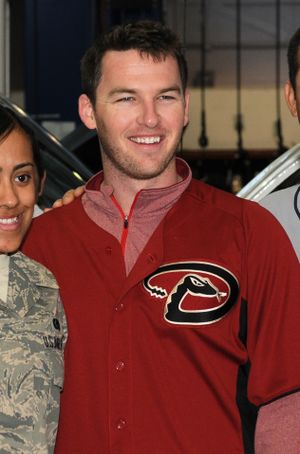 The brother of Tim Drew and J.D. Drew, shortstop Stephen Drew was selected by the Arizona Diamondbacks in the first round of the 2004 amateur draft. He was selected 15th overall, but would likely have gone much higher if his expectations for a big signing bonus hadn't scared away a lot of teams. He made his big league debut with Arizona two years later, in 2006, hitting .316 and slugging .517.

He was a second-team College All-American in 2002, a third-team College All-American in 2003, and a second-team College All-American in 2004. At his first stop in the minors in 2005, he hit .427 in 19 games with the Camden RiverSharks of the Atlantic League, an independent league. He was playing there because it took him almost a year to come to an agreement on a contract with the Diamondbacks. In Single A the same year, after finally coming to an agreement, he hit .389 and was brought up to Double A briefly. The next season he spent 83 games in the Pacific Coast League, hitting 13 home runs at age 23 before being brought up to the majors. Baseball America rated him the top prospect in the PCL that year. He made the league All-Star team at shortstop. In his first taste of major league action in 2006, he played 59 games with an excellent batting line of .316/.357/.517, hitting 7 triples during his short stint.

Drew was the Diamondbacks' starting shortstop from the time he played his first major league game, and in his first full season in 2007, he was among the team leaders in spite of his lack of big league experience as Arizona captured the NL West title. He played 150 games and while he hit only .238, he showed good power with 28 doubles and 12 homers, drew 60 walks and stole 9 bases without being caught once. He started all 7 of Arizona's postseason games, going 7 for 14 with a double, 1 triple and 2 homers as they swept the Chicago Cubs in the NLDS. He was 5 for 17 in the 2007 NLCS, but without an extra-base hit or RBI, and Arizona was swept in four games by the Colorado Rockies.

Drew broke his ankle sliding at home plate in a game against the Milwaukee Brewers on July 20, 2011. In his 6th season with the D-Backs, he was hitting .252/.317/.396 in 86 games, but the injury put an end to his season, Ironically, Brewers CF Carlos Gomez suffered a serious injury on the very next play, breaking his collarbone while diving to catch a fly ball off the bat of Ryan Roberts. The D-Backs used reserve Willie Bloomquist and veteran John McDonald, acquired in a trade from the Toronto Blue Jays, to play short for the remainder of the season and into the postseason. However, the injury was serious enough that heading into the 2012 season, Arizona still did not have a fixed date for Drew's return to action and was planning to continue using Bloomquist and McDonald when the new season began. With the D-Backs unable to repeat the previous year's success, the team's brass began expressing frustration about Drew's continued absence from the field. On June 5th, team owner Ken Kendrick told a local radio:

"I'm going to be real direct about Stephen. I think Stephen should have been out there playing before now, frankly. I, for one, am disappointed. I'm going to be real candid and say Stephen and his representatives are more focused on where Stephen is going to be a year from now than going out and supporting the team that's paying his salary."

Drew's agent Scott Boras defended his charge, stating that Drew had always made an all-out commitment to playing the game. He finally returned to the line-up on June 27th, going 1 for 4 in a game against the Atlanta Braves. He only hit .193 with 2 homers and 12 RBI in 40 games, though, and on August 20th was traded to the Oakland Athletics in return for minor league infielder Sean Jamieson. He did better with Oakland, displacing Cliff Pennington from the shortstop spot and hitting .250 in 39 games with 5 homers and 16 RBI, to finish the year with a batting line of .223/.309/.348 in 78 games. He went 4 for 19 with a pair of doubles as the Athletics lost to the Detroit Tigers in the ALDS. Not in a position to negotiate a long-term contract on favorable terms, he decided to sign a one-year deal with the Boston Red Sox on December 17th, for $9.5 million. However, shortly after the start of spring training, he suffered a concussion when hit by a pitch on March 7th and did not play any spring games after that, starting the season on the disabled list as a result. He was cleared to return to action by a physician designated by Major League Baseball on April 2nd, although he first needed to get into playing shape, having had almost his entire spring training wiped out by the concussion. The Red Sox activated him on April 10th. He played 124 games for the Red Sox, hitting .253 but with 29 doubles, 8 triples and 13 homers from the bottom of the line-up, while flashing some good glove work. However, he was in a postseason-long slump at the plate, as he hit .133 in the ALDS, .050 in the ALCS and .158 in the 2013 World Series. He did collect two key RBIs in the Red Sox's win over the St. Louis Cardinals in the Fall Classic however, on a sacrifice fly in Game 4 and a solo homer in Game 6, contributing important runs to Boston wins both times. With young Xander Bogaerts now ready to start for the Sox however, there was some question about his longer-term future with the team.

Drew wanted to cash in on his successful comeback season with Boston and turned down an offer of $14.1 million for a year in hope of securing a multi-year deal somewhere. He found out that the market was more difficult than he imagined, as he and Kendrys Morales, another Boras client, were the last significant free agents left unsigned as spring training was heading into its final stretch. The most logical landing spot for Drew was the Detroit Tigers, where José Iglesias, who had spelled him with the Sox in the first half of 2013 before being traded to the Bengals, was likely out for the year with hairline fractures in his legs. However, agent Scott Boras had not lowered his financial demands, and as a result the Tigers were content to look at internal options or another low-cost alternative to start the year, and would re-evaluate the situation in a couple of months. Because Drew's signing was tied to a high-level compensation pick in the 2014 amateur draft, it was possible that he would need to wait until after the draft to get a team to bite as teams seemed to think that spending a lot of money on a player is one thing, but losing a top draft pick is a lot more serious. On May 20th, the Red Sox decided to bring him back on a contract to finish the season, representing $10 million. The Sox were concerned that the young Bogaerts did not have enough range to play the shortstop position at the major league level. Drew played his first game of the season on June 2nd, starting at his familiar shortstop position. However, he hit only .176 in 39 games and the Red Sox, well out of the running by then, decided to make over their roster at the trading deadline on July 31st. Drew was one of the players affected, being sent to the New York Yankees in return for IF Kelly Johnson in the first trade between the two rivals since 1997. He hit even worse for the Yankees, batting .150 in 46 games while playing mainly second base, to finish with a combined batting line of .162/.237/.299 in 85 games.

It seemed like there was no chance to see Drew return to the Yankees in 2015, given his poor performance the previous year, but with Derek Jeter having retired after the 2014 season, the Yankees wanted to have multiple options at the position. They were hoping that young Didi Gregorius, acquired in a trade during the off-season, would claim the job, but were hedging their bets. Thus, veteran Brendan Ryan was kept around, and Drew was re-signed to a one-year deal in January. It was also likely that he would see action at second base, a position for which the Yankees did not have any veteran players. On April 13th, he hit a pinch-hit grand slam off Tommy Hunter of the Baltimore Orioles to give the Yankees a 6-5 win; it was the first such homer for the Yankees since Jorge Posada had hit one back in 2001. He ended up being the most-used player at second base for the Yankees, even though he hit only .201 in 131 games. His power stroke came back to some extent, with 16 doubles and 17 homers, but his OPS+ was still well below average at 79. However, he suffered a concussion in the final days of the season, and was not available to start the Wild Card Game, which the Yankees lost to the Houston Astros as rookie Rob Refsnyder manned second base. He became a free agent after the season and on December 29th, he signed a one-year deal with the Washington Nationals, where he was expected to be a back-up at both shortstop and second base.

Drew spent his final two seasons with Washington. In 2016, he played 70 games and hit .266 with 8 homers and 21 RBIs while seeing almost equal time at second, third and short. His OPS+ was a solid 123, making him a very valuable bench player. He played in the postseason for the final time, going 0 for 4 as the Nats lost to the Los Angeles Dodgers in the Division Series. He was back in 2017, but his production fell dramatically. It was not apparent in terms of batting average, as he hit .253 in 46 games, but he hit only 1 home run and his OBP and slugging percentage both fell dramatically, resulting in an OPS+ of only 71. On July 29th, he was placed on the disabled list because of an abdominal strain, then was transferred to the 60-day DL at the end of August and he never played again, his career ending with a whimper after 12 seasons. He became a free agent that November but no team signed him and he retired quietly.