Note: This page is for pitcher Evan Crawford who made his major league debut in 2012; for the minor league outfielder of the same name, click here. 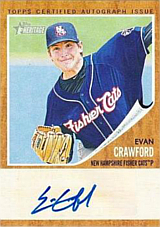 Crawford was 9-2 with a 0.97 ERA as a junior at Prattville High School and 7-3 with a 1.17 ERA and 113 strikeouts in 71 innings as a senior while also hitting .415. He threw two no-hitters in high school. Baseball America rated him the 128th best high school player in the country his senior year. He had a 5-8, 4.35 record as an Auburn freshman, falling to 5-6, 5.91 as a sophomore. He was excellent in the Cape Cod League to boost his stock, saving five games with a 0.67 ERA for the Harwich Mariners. He went 3-0 with a 2.42 ERA as a junior, with the Toronto Blue Jays and Rob St. Julien picking him in the eighth round of the 2008 amateur draft.

Evan began 2012 with the Fisher Cats, tossing four shutout innings. He was called up to the bigs when Sergio Santos went on the paternity list. In his debut, he relieved Luis Pérez in the 9th of a 9-2 loss to the O's. He retired Adam Jones on a grounder and Wilson Betemit on a strikeout, Chris Davis doubled, but Crawford recovered to get Ronny Paulino to end the game. In ten games, he had a 6.75 ERA over eight innings of work. Crawford was designated for assignment in 2013 and finished his career in the Chicago White Sox organization in 2014.