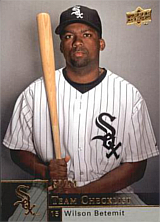 Wilson Betemit was signed by scout Rene Francisco for the Atlanta Braves in 1996. He made his pro debut with the GCL Braves the next summer. Betemit came up briefly at a young age with the Atlanta Braves, and was later traded to the Los Angeles Dodgers where, despite a decent eye and some pop, he did not live up to expectations. He did play a personal best 143 games split between Atlanta and LA in 2006, with career highs in almost all major offensive categories including home runs (18), RBI (53) and hits (98). Hitting .231 with a .474 slugging percentage in '07 with limited at bats, Wilson was flipped to the New York Yankees in 2007 for reliever Scott Proctor.

Before the 2009 season, Wilson was traded to the Chicago White Sox for Nick Swisher. He only played 20 games for the Pale Hose, while Swisher became a regular for the Yankees. In 2010, he played for the Kansas City Royals, then was traded to the Detroit Tigers midway through the 2011 season, after the Royals brought up Mike Moustakas to be their third baseman. Betemit was the most frequent starter at the hot corner for the Tigers after his acquisition, hitting .292 with 5 homers in 40 games, but in the ALDS, he went 0 for 8 against the New York Yankees, and gave way to Don Kelly and Brandon Inge in the ALCS. Betemit signed with the Baltimore Orioles before the 2012 season, already his 7th major league organization as he only turned 30. He finished his big league career with the O's in 2013. After a minor league season in the Tampa Bay Rays chain, he was suspended prior to the 2015 season after testing positive for performance-enhancing drugs.

Note: On some sites, notably mlb.com and espn.com, Wilson Betemit's age is listed wrong. B-Ref has it right. Betemit went through reverse age-gate back in 2000. See: [1] for details.