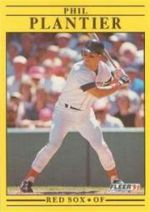 Phil Plantier was signed as an 11th Round pick in the 1987 amateur draft by the Boston Red Sox and scout Ray Boone. Plantier struggled in his first two professional seasons with the Elmira Pioneers and the Winter Haven Red Sox in 1987 and 1988, respectively. In 1989, however, Plantier established himself as a legitimate prospect. He finished 4 hits shy of winning the Carolina League Triple Crown. His 27 home runs and 105 RBI led the league but his .300 batting average was third behind Luis Mercedes (.309) and John Wehner (.301). He was the 6th player from Lynchburg in 7 years, either the Mets or Red Sox, to win the Carolina League MVP, following Lenny Dykstra (1983), Barry Lyons (1984), Shawn Abner (1985), Gregg Jefferies (1986), and Mickey Pina (1988).

In 1990, Plantier led the entire minor leagues with 33 home runs while playing in AAA with the Pawtucket Red Sox. He also led the International League by striking out 148 times. He earned a promotion to the majors and made his Major League debut on August 21st. Plantier had 2 hits, including a double, in 15 at-bats at the Major League level in 1990.

Plantier split the next two seasons, 1991 and 1992, between AAA Pawtucket and Boston. He batted .272 with 18 home runs and 65 RBI in 161 games at the Major League level during that time. He was traded by the Red Sox to the San Diego Padres for pitcher Jose Melendez following the 1992 season.

He was involved in an twelve-player trade, one of the largest in baseball history, in which the Padres traded him with Craig Shipley, Pedro Martinez, Ricky Gutierrez, Doug Brocail and Derek Bell to the Houston Astros for Sean Fesh, Brian Williams, Roberto Petagine, Steve Finley, Andujar Cedeno and Ken Caminiti.

Plantier was the hitting coach at Point Loma Nazarene University in 2007-2008.

Plantier managed in the independent South Coast League in 2007 and in the Seattle Mariners chain in 2009. He spent 2010 as a minor league hitting coordinator for the Seattle Mariners and was hitting coach of the Lake Elsinore Storm in 2011. Plantier was named interim manager of the Storm on June 2nd. he was then named hitting coach of the Padres for the 2012 season, replacing Randy Ready. He stayed until the end of the 2014 season, being dismissed after the Padres had a particularly difficult season with the bat. Plantier became a coach for the Scranton/Wilkes-Barre RailRiders in 2018-2019 and was scheduled to return in 2020 before the season was cancelled due to Covid-19. Plantier was a coach for the Jacksonville Jumbo Shrimp in 2021-2022. In 2023 he was named assistant hitting coach of the Los Angeles Angels.

Plantier's nephew, Kyle Plantier, was a sophomore on the University of California, Santa Barbara squad that made the 2016 College World Series.