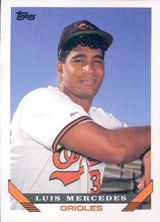 Outfielder Luis Mercedes was signed as a free agent for the Baltimore Orioles by scout Carlos Bernhardt on February 16, 1987. After his playing career, he became a coach with the Estrellas Orientales in the Dominican League, for which he had played previously. He was the league's Rookie of the Year in 1989-90, and won a batting title and led the league in stolen bases in 1991-92.

Mercedes died of complications from diabetes, notably kidney failure that forced him to undergo frequent dialysis, at the age of 57 in June 2019. A major sports figure in his hometown of San Pedro de Macoris, his funerals were held in the city's baseball stadium, Estadio Tetelo Vargas. He was married with six chiildren.