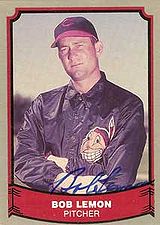 Inducted into Hall of Fame in 1976

He was a position player for Cleveland for two cups of coffee (1941-1942) and then primarily a pitcher 13 years (1946-1958). Bob Lemon was the centerfielder for Cleveland in Bob Feller's 2nd no-hitter - against the Yankees in 1946. Mostly an infielder in the minors, he hit 37 home runs and was 2-6 as a pitcher. He was 20 years old when he broke into the big leagues on September 9, 1941. He married Jane H. McGee on January 14, 1944 and had two sons. After his playing days were over, he was a minor league manager, MLB manager and coach and a New York Yankees scout until his death, giving him 61 years of activity in baseball. His hobby was golf. 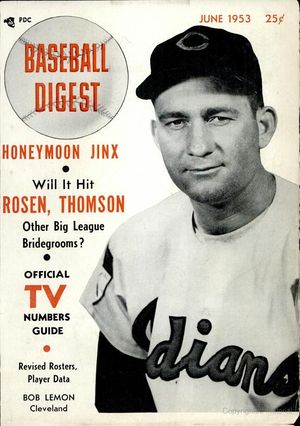 The story of Bob Lemon is the tale of three careers: as a mediocre infielder prior to World War II, as a star pitcher during post-war era, and finally as a successful major league manager.

His first Baseball Card appearance was in the 1949 Bowman set.

The easygoing Lemon learned to pitch in the Major Leagues and went on to become one of the most successful righthanders of the post-WWII period. Prior to World War II, Lemon had struggled as a light-hitting third baseman. In two trials as a third baseman before the war, he failed to stick with the Indians because of his mediocre hitting. He showed a strong arm in the field, but his throws had a natural sinking effect. The Indians first placed him in center field in 1946, but Lemon had pitched a lot in the navy during World War II while he couldn’t hit enough to be a center fielder, so manager Lou Boudreau placed him on the mound. He became a phenomenal pitcher. Lemon played ceter field during Bob Feller's 2nd no-hitter (at Yankee Stadium) in 1946.

Lemon learned to pitch on the job with the Indians and eventually won 20 games seven times. A sinker-ball specialist, Lemon teamed with Bob Feller, Early Wynn, and Mike Garcia to form one of the greatest pitching staffs in baseball history. He retired in 1958 with 207 wins, all but 10 of them won in a ten-year span.

Lemon was one of the best hitting and fielding pitchers, as he first came up to the big leagues as an infielder/outfielder. However, his pitching stints in Hawaii during World War II kept his pitching arm in shape and helped him get noticed as a pitcher.

Bob literally went from saving Bob Feller's ballgame on opening day in 1946, by throwing to second base and doubling off a baserunner after a daring catch in center field, to taking the pitcher’s mound and becoming a tremendous pitcher. Bob had a good curveball, a good slider, and a vicious sinker pitch (BA).

Although bothered by wildness, Lemon showed enough promise in his first season on the mound (2.49 ERA in 94 innings) to continue the experiment. In 1947 he was 11-5 and became the Indians' second most effective starter behind Hall of Famer Feller.

Lemon became the leader of the outstanding Indians pitching staffs of the 1950s that also included Feller, Wynn, Garcia, Art Houtteman and later Herb Score. In a remarkably consistent nine-year stretch (1948-1956), Lemon won 20 or more games seven times. He missed the magic number only in 1951 with 17 victories and 1955 when his 18 wins topped the league. A workhorse, he led in complete games five times and innings pitched four. TSN named him the Outstanding AL Pitcher three times (1948, 1950 & 1954).

The 1954 Indians set an AL record with 111 victories (in 154 games) as Lemon led the pitching staff with a 23-7 mark. He opened the World Series against the Giants and took a 2-2 tie into the tenth inning before giving up a three-run home run to pinch hitter Dusty Rhodes. When the Indians lost the next two games, manager Al Lopez brought Lemon back on two days' rest, but he was shelled early as the Giants swept the Series.

Lemon's money pitch was his sinking fastball. He led the AL in strikeouts with 170 in 1950, but he was most effective when opposing batters were beating the ball into the dirt. Always slightly wild, his season bases on balls and strikeout marks were usually similar, as were his career bases totals of 1,251 walks and 1,277 strikeouts.

Lemon was considered to be one of the best-hitting pitchers of his time and was often used as a pinch hitter, totaling 31 hits in 109 pinch-hit appearances (.284). His 37 home runs lifetime is just one behind Wes Ferrell's record for pitchers, and his seven home runs in 1949 ties him for second on the pitchers' season list.

After leaving the majors, Lemon pitched briefly in the Pacific Coast League, then turned to scouting, coaching, and managing.

In 1966, The Sporting News named him Minor League Manager of the Year when his Seattle team won the PCL championship. From 1970 to 1972, he managed the Royals, with a 1971 second place the team's best mark, earning him Manager of the Year honors in certain polls. In July of 1972 Lemon was quoted as saying he was happy he was only a few years from retirement and that he wanted to leave baseball for some remote island. Even though Lemon says he was mis-quoted, Ewing Kauffman decided he wanted a younger manager, and Lemon was fired after the season.

He took over the Chicago White Sox in 1977, managing another mediocre team to a strong finish, and again won Manager of the Year consideration, but he was replaced the next season with the team in fifth place. A few weeks later, Lemon began a bewildering series of ups and downs with the New York Yankees. First, he succeeded fiery Billy Martin as skipper of the third-place Yankees. The team responded to his relaxed leadership and finished the regular schedule tied with the Boston Red Sox for the division title. New York won the one-game playoff on Bucky Dent's home run. After taking the ALCS, Lemon's Yankees went on to a World Series win over the Dodgers, rallying after losing the opening two games.

Midway through the 1979 season, Martin replaced him as Yankee manager. In 1981, when the player strike split the season into two halfs, Gene Michael managed the Yankees to a first-half division lead, but when the team faltered in the second half after the strike, Lemon returned as manager. Even though the Yankees had a losing record under his helm, he took them to victory in the divisional playoff with second-half winner Milwaukee and then to a three-game sweep of the Oakland Athletics in the ALCS. The Yankees lost the World Series to the Dodgers in six games, and Lemon was widely criticized for a managerial decision he made in the last game, when he called in Bobby Murcer to pinch hit for ace pitcher Tommy John with two on and two outs in the 4th inning; Murcer flied out to right field, and the bullpen imploded after John's departure, giving the game and the series away to the Dodgers. When New York started slowly in 1982, Lemon was again replaced as manager after 14 games only, this time by Michael. He did not even get to manage the AL team in the 1982 All-Star Game, a traditional perk of the previous year's World Series manager, and was replaced by Billy Martin, whose Athletics had been swept by Lemon's Yankees in the ALCS. (BC)

Lemon died at age 79 from a heart attack/stroke after a long period of failing health at Palmcrest Convalescent Home in San Bernardino, CA and was cremated. He was survived by his wife, Jane, and two sons. The hard-drinking, easygoing Lemon had been seriously ill and housebound, a virtual recluse in his native Long Beach, CA but was nevertheless still on the Yankees payroll as a scout. It was a "lifetime contract" reward from George Steinbrenner for the 1978 Yankee World Championship.

He was elected to the Baseball Hall of Fame on January 22, 1976 by the Baseball Writers Association of America.

His biography Bob Lemon, the Work Horse was written by Ed McAuley.

Lemon's son, Jeff Lemon, pitched for the Billings Mustangs in 1969.