Nicknamed "Rapid Robert", Bob Feller was regarded as one of the hardest throwing pitchers of his era, and his blazing fastball set the standard against which all of his successors have been judged. He led the American League in strikeouts 7 times and won at least twenty games 6 times in his career, spent entirely with the Cleveland Indians. In 18 seasons in the majors, he won 266 games and had 2,581 strikeouts, numbers that would likely have been much higher if he hadn't missed three and a half years serving in the navy during World War II. 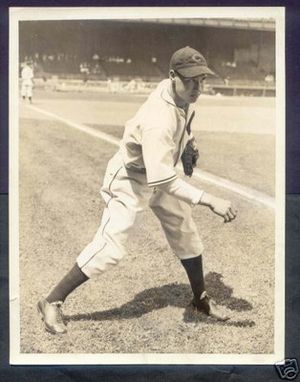 Born and raised in Iowa, Feller pitched five no-hitters at Van Meter High School before signing with the Indians at a 17-year-old on the recommendation of legendary scout Cy Slapnicka, who was acting as the team's general manager at the time. Going straight from high school to the majors, he made his big league debut in July 1936. After pitching out of the bullpen in 6 games, he made his first big league start on August 23rd against the St. Louis Browns, striking out 15. The next month, he struck out 17 in an outing against the Philadelphia Athletics, tying a major league record and breaking the AL mark. Overall that summer, he completed 5 of his 8 starts and struck out 76 in 62 innings. After the season, he returned to high school for his senior year.

When Feller graduated in 1937, NBC Radio covered the event. Overall, he went 9-7 and struck out 150 batters during the course of that summer. The next year, 1938, he struck out 18 Detroit Tigers on the season's final day, breaking his previous record for strikeouts in a game. That total remains the Cleveland Indians record for most by a pitcher in a nine-inning game, having only been matched by Corey Kluber in 2015. He won 17 games that year, leading the AL with 240 strikeouts and making the All-Star team for the first time in his career. Over the next three seasons he cemented his place as one of the top hurlers in the game, winning 76 games and leading the league in wins and strikeouts in each campaign. On April 16, 1940, he threw a no-hitter against the Chicago White Sox, becoming the only big leaguer to throw a no-no on Opening Day. 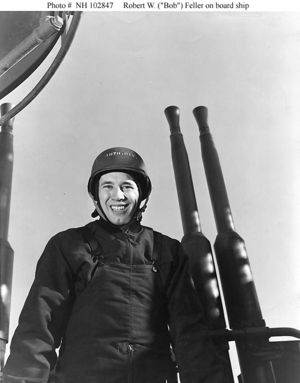 On December 9, 1941, the day after the bombing of Pearl Harbor, Feller enlisted in the Navy, putting aside his 3-C draft deferment as his family's sole support and becoming the first Major Leaguer to enlist. During the war, he was CPO aboard the battleship Alabama in the North Atlantic (escorting American ships) and South Pacific (8 invasions); he earned five Campaign Ribbons and eight battle stars. Missing nearly four seasons of baseball, he was released from active duty on August 24, 1945.

Returning to the Indians in late 1945, Feller made 9 starts, winning 5 games. The next season, on April 30, ^[1946 Indians|1946]], he hurled the second no-hitter of his career, beating the New York Yankees. He put up some of the best numbers of his career that year, leading the AL with 26 wins, 348 strikeouts, 36 complete games, and 10 shutouts, while recording a career-low 2.18 ERA. In 1947, he again paced the circuit with 20 wins, 196 strikeouts, and 5 shutouts. Despite a slow start in 1948 (he was 9-12 in late July), he again led the AL in strikeouts that year as the Indians won the pennant. However, he struggled on the mound in the World Series, losing a 1-0 decision to the Boston Braves in Game 1 and getting shelled for seven runs in Game 5, but Cleveland won the crown in six games.

After two sub-par seasons, Feller won 22 games in 1951, leading the AL in victories for the sixth time in his career. That year, on July 1st, he threw a no-hitter against Detroit, the third of his career. By the middle of the decade, he had become mostly a part-timer, splitting his time between the rotation and the bullpen. His team reached the World Series again in 1954, but he did not pitch. On May 1, 1955, he combined with 21-year-old teammate Herb Score on one of the most dominating pitching performances ever seen in a doubleheader. In the opener, he pitched a one-hitter over the Boston Red Sox, facing only 29 men; Score then fanned the first nine Boston batters he faced and ended with 16 strikeouts and a 2-1 win. The 16 K's were only two short of Feller's then-record 18. Feller retired following the 1956 season.

Feller became the first president of the Major League Baseball Players Association (MLBPA) in 1954. During his playing days, he was the highest-paid player in baseball, in large part because he negotiated bonus clauses into his contract tied to the Indians' annual attendance. The team was very popular, particularly in the immediate post-war seasons of 1946-1949, and the bonus clauses were larger than his already substantial base salary. 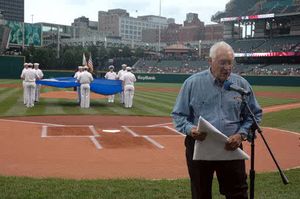 Feller was elected to the Hall of Fame in 1962. He continued to do public relations work for the Indians for more than 40 years and claimed he has shaken more hands than anyone in the history of the world. He estimated that he had signed more than one million autographs for fans.

In an interview in 2006, Feller came out against putting Mark McGwire into the Hall of Fame due to his alleged steroid use. When asked about the lack of proof, Feller said "I know a bum when I see one".

Feller was diagnosed with leukemia in 2010 and several months later was hospitalized with pneumonia. He passed away on December 15th of that year at age 92. In 2013, the US Navy created the Bob Feller Act of Valor Award in his honor.

"We in Cleveland have been blessed to have had him with us these many years. To say he will be missed is such an understatement." - Indians owner Larry Dolan

Feller was the cousin of Hal Manders. His first Baseball Card appearance was on the 1936 R314 Goudey set.

The following is an anecdote about watching Feller pitch is his prime in 1946 from someone who did actually see him then (originally posted here):

I saw Feller three times in his prime. One I don't remember, one I vaguely remember, and one I remember. You may recall I had an uncle who lived in Chicago who my father would visit once a year. Actually, the pretense was to see his mother - my grandmother (who lived with my uncle - sort of), but they spent most of their time raising Cain. I got to go along (as I later learned) to delude my mother into thinking the week was one of reconnecting to the family. Actually, it was a week of me going to ballgames, carnivals, and hanging out at one of the taverns my uncle owned. My uncle Herb was a great guy. A true Damon Runyon character.

But ANYWAY, I saw Feller in 1946 when he was at the top of his game. I remember he shut out the White Sox. I swore I wouldn't use retrosheet so I will say the score is 2-0 and Feller struck out a lot. Yeah, I know, pretty impressive. Cut me some slack. I was thirteen, drinking beer, and the responsible member of my group. Like I wrote, my uncle was GREAT.

What I find funny is Feller talking about how players should act. What I took away from that game is that Bob Feller was one cocky SOB. Kind of like Pedro. Not overt but all sorts of little mannerisms that told the hitters they didn't matter. The swagger to the mound, the disdainful look, the flip of the glove after getting the ball back when a batter swung and missed. He had it ALL going on. Bob Feller knew he was good, knew the hitter knew he was good, and there wasn't a d*mn thing the hitter could do about it. Sort of a "take your swings, whatever" attitude.

I also think it's pretty obvious why Feller walked so many in his prime. He knew nobody could touch him so why bother working on control? The other thing I distinctly recall is the sound of the catcher's mitt. We all know that sound. Well, take that sound and treble it. Just a THWACK. Curveball that fell off the table. But I don't think Feller had one friggin' clue where it was going. He just wound up and WHOOSH. And since he felt he was indestructible if he walked somebody he would just bull his way through the situation. Runners on? Bah, I'll get the next guy.

Feller (left) in his later years, shown with a VA nurse