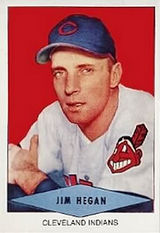 "When you can catch like Hegan, you don't have to hit." - Bill Dickey

Jim Hegan was a catcher with legendary defensive skills who played 17 years in the major leagues, appearing in five All-Star Games. As testament to his defensive skills, he never once appeared at any position but catcher in his major league career, and threw out an amazing 50 percent of base stealers, more than Johnny Bench or Yogi Berra.

Hegan made his big league debut with the Cleveland Indians in 1941. Rollie Hemsley was the Indians' first-string catcher that season. Hegan hit .319 in 16 games, by far the highest batting average of his major league career. After appearing in 68 more games in 1942, he went into the Coast Guard for the rest of World War II.

Coming back in 1946, he was the first string catcher for the Indians from then till 1956. Not only a fast catcher who quickly reached bunts and pop-ups, he also was seen as a wizard for calling pitches. Opposing catcher Joe Tipton said: "Hitters who strike out against the Indians cuss Hegan."

His best year as a hitter was in 1948, when he hit .248 (one of his better averages), and added 6 triples and 14 home runs. The Indians won the 1948 World Series that year, with Hegan batting eighth in the order. He hit a home run in Game 5 of the Series off Nels Potter of the Boston Braves. 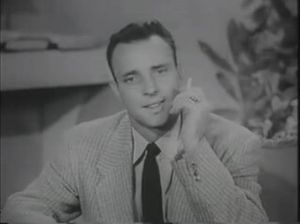 Hegan in an ad for Camel Cigarettes in the 1950's.

Hegan was shown in television ads for cigarettes when the Indians were having their incredible run, in the 1950s.

Hegan was legendary as a defensive catcher:

"As far as I'm concerned, you start and end any discussion of catchers with Jim Hegan." - Birdie Tebbetts

"In a tight spot, you always went with Jim's call," - Herb Score

"[Hegan] was the best defensive catcher I ever had." - Bob Feller

He was the father of Mike Hegan.

He once wrote a book called Jim Hegan's Secrets of Catching. In 1949 Popular Mechanics magazine interviewed Hegan regarding the secrets of pitching. Hegan said "speed and control" were the key assets of a good pitcher.