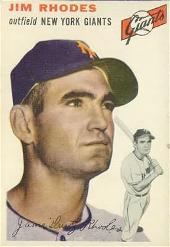 Dusty Rhodes was one of the best-known pinch-hitters of the 1950s, famed for his performance in the 1954 World Series. Of his 576 appearances in regular-season major league games, only about half of them included playing in the field. When he did play in the field, he was an outfielder.

Rhodes reached the majors with the New York Giants in 1952 and had his best season two years later in 1953. That year, he hit .341 with 15 homers in 186 at-bats, posting a .695 slugging percentage, and on August 29th, he hit two doubles, two triples, and two home runs in a doubleheader.

Rhodes is the first player to hit a walk-off home run in extra innings of a World Series game. It happened in Game 1 of the 1954 World Series, against Bob Lemon of the Cleveland Indians. The game was tied, with runners on first and second. His crucial pinch hits in that series were key to the Giants' unexpected sweep of the Indians; had the World Series Most Valuable Player Award been in existence that year, he would likely have won it, but it was not created until the following year. He slugged 1.667 in that Series.

Rhodes was also the last player to bat in the Polo Grounds for the Giants, on September 29, 1957.

He came from a poor family of eight children and had little formal education. He began working in a grocery store in Montgomery, AL at 15 and joined the Navy at 17, serving in the Pacific during World War II. After his discharge, he began to play semi-pro ball in Montgomery, where he was spotted by a scout, Bruce Hayes, who was working for the Nashville Volunteers of the Southern Association. He was assigned to the Class D Hopkinsville Hoppers to begin his career in 1947.

He is not the same person as professional wrestler Virgil "Dusty Rhodes" Runnels.