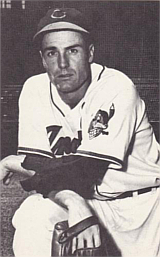 “High-powered masterminding strategic concepts and Machiavellian managerial maneuvering are awesomely impressive when they work. Marse Joe McCarthy carefully studied the wind which blew out toward the short left field fence today and abandoned all notions of using his stylish southpaw, Mel Parnell. Instead he gambled on the ancient Denny Galehouse, a cutie on the hill who uses guile in place of speed. However, Lou Boudreau, who probably doesn’t know anything, risked everything on his stylish young southpaw, Gene Bearden. Fenway Park is supposed to be poison on left-handed pitchers, particularly when the wind blows the wrong way. But Bearden fed the poison in large doses to the Red Sox and killed their pennant hopes.” - Arthur Daley, The New York Times, on the 1948 American League playoff

Gene Bearden, who pitched seven seasons in the majors, had a fabulous rookie season in 1948, winning twenty games for the Cleveland Indians, leading the American League in ERA, and winning Game 3 of the World Series against the Boston Braves. The rest of his career was a lot less dominant, as he routinely walked a lot more batters than he struck out, finishing his major league career with 435 walks against only 259 strikeouts. He also had a good eleven-year minor league career with a record of 139-97. He served in the Navy in World War II, on the cruiser Helena, which sank on July 6, 1943, in the battle of Kula Gulf; he was wounded in that incident.