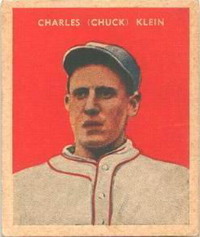 Inducted into Hall of Fame in 1980

Chuck Klein played 17 years in the National League, mostly for the Philadelphia Phillies. He led the league in numerous offensive categories during his first six years in the majors. He appeared in the World Series once, with the 1935 Cubs, and hit well in that Series.

Klein is a Hall of Famer whose numbers were magnified by playing in a hitter-friendly environment. He hit his 100th home run in his 390th career game, which at the time was the record for the fastest 100 home runs. He continues to hold the record for the fastest 1,000 hits in history. He reached the mark in 683 games. However, in spite of his statistics being inflated by context, his lifetime OPS+ of 137 in a 17-year career is still quite decent, ranking even with players such as Jack Clark, Pedro Guerrero, and Reggie Smith and above Bill Terry at 136.

Playing in the shallow right field of the Baker Bowl, where he sometimes turned singles into outs at first base, Klein still holds the record for most assists by an outfielder - 44 in 1930.

When he stole 20 bases to lead the National League in stolen bases in 1932, it was the lowest total for a stolen base leader in the history of the league up to that point. On May 1, 1942, he was pressed into duty as an umpire, alongside Cincinnati Reds pitcher Bucky Walters, assisting home plate umpire George Magerkurth, because umpire Lou Jorda had the flu. The two players only worked a single inning, until Jocko Conlan, who had flown in from Pittsburgh, PA to Cincinnati, OH, made it to the ballpark.

He was inducted into the Indiana Baseball Hall of Fame in 1981. His first Baseball Card appearance was in the 1932 U.S. Caramel set.

"One reason why I've been able to play baseball well is because it's fun to me. Many players find it work." - Chuck Klein