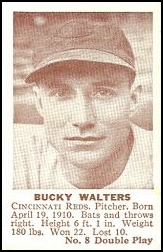 Bucky Walters was an outstanding hitter for a pitcher, which is unsurprising, as he made it to the majors as a third baseman before being converted to the mound. Bill James has described him as belonging to a pitching group with Bob Lemon, another infielder-turned-pitcher. Not only was Lemon similar to Walters in having been converted from third base to pitching after reaching the majors, his pitching style was similar as well.

On May 1, 1942, he was pressed into duty as an umpire, alongside Philadelphia Phillies outfielder Chuck Klein, assisting home plate umpire George Magerkurth, because umpire Lou Jorda had the flu. The two players only worked a single inning, until Jocko Conlan, who had flown in from Pittsburgh, PA to Cincinnati, OH, made it to the ballpark. He worked another game as a fill-in umpire in 1947, sharing duties with Dick Culler of the Boston Braves.

He is the highest ranked, non-active, post-1900 pitcher or player in the Black Ink Test not in the Hall of Fame.

He hit a home run while pitching a complete game shutout in the 1940 World Series. Jesse Haines is the only other pitcher to have done this.

In 1939, Bucky earned the National League MVP Award by one of the largest margins of all time. Bucky finished first in all major categories and won the pitching triple crown (Wins/SO/ERA); he also batted .325 and is one of few to win 20 or more games and bat above .300 in the same season.

Walters's name was on the 2013 Hall of Fame ballot in which the Veterans Committee examined candidates from the pre-integration era.