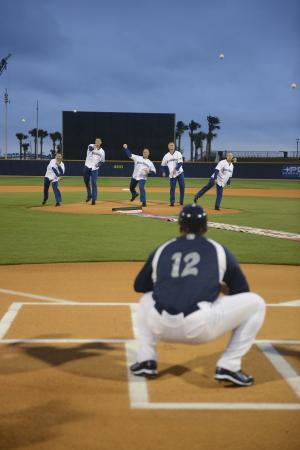 The Pensacola Blue Wahoos, of the Southern League and briefly in Double-A South, replaced an independent team when owner Quint Studer bought and moved the Carolina Mudcats. The Miami Marlins farmhands play their home games at Blue Wahoos Stadium in Pensacola, FL.

Studer's indy team, the Pensacola Pelicans, had played eight seasons by the bay after the city went 40 years with no professional ball. His new team's name was chosen through a name-the-team contest, beating out finalists Aviators, Redbones, Salty Dogs, Loggerheads and Mullets.

In 2015, PGA star and Pensacola native Bubba Watson purchased a minority share in the Wahoos.

MLB's 2021 Minor League Reorganization left the Wahoos in Double-A but moved them into the Marlins' farm system. The Marlins became Pensacola's third different parent already, following the Cincinnati Reds (2012-2018) and Minnesota Twins (2019), but it makes sense in the context of the reorganization as both parents shortened distances to farm clubs: the Twins by moving their Double-A players from Pensacola to Wichita, KS, and the Marlins by putting their Triple-A players in Jacksonville, FL instead of Wichita while keeping their Double-A prospects in Florida - albeit four hours farther away.

Studer, who started his career teaching in Janesville, WI, put together the deal that saved minor-league baseball for nearby Beloit, WI, and is now the majority owner of both clubs.

The Wahoos plan to join the Copa de la Diversión Hispanic engagement campaign in 2023. They are the first club to take Copa nickname suggestions.

This page is in need of some additional content. Please help the Bullpen by expanding it, or learn how to contribute.
Retrieved from "https://www.baseball-reference.com/bpv/index.php?title=Pensacola_Blue_Wahoos&oldid=1226405"
Categories: