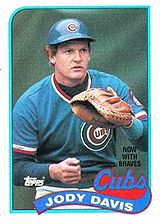 Tall, rangy Jody Davis was a highly-popular catcher with the Chicago Cubs in the 1980s, and arguably one of the best in Cubs's history. Sporting a very strong throwing arm, he was Their regular backstop for six consecutive seasons. In all, Davis played ten seasons in the majors, was a two-time All-Star, and won a Gold Glove in 1986.

At age 19, Davis was selected by the New York Mets in the third round of the January 1976 amateur draft. He debuted with the 1976 Marion Mets, hitting .232/.287/.366 and leading Appalachian League catchers with 13 errors. In 1977, he was hitting .290/.381/.514 as a member of the Little Falls Mets, though his fielding remained a question as his 10 errors were second among New York-Penn League backstops. The next summer, he hit .262/.362/.449 for the 1978 Lynchburg Mets and led the Carolina League with 13 sacrifice flies. He was fourth in the league with 16 homers and his 94 RBI were second to Ozzie Virgil Jr.'s 98, but Virgil beat out Davis for the All-Star spot at catcher with a far better offensive year. He was again second in his league in errors by a backstop.

In December 1980, Davis was drafted by the Chicago Cubs in the 1980 Rule V Draft. He broke into the majors in 1981, the strike-shortened season, with 56 games, hitting .256/.333/.361. The Cubs had started the season very slowly, and Jody was part of the effort to fix things, as he was the club's regular backstop in the second half. He hit a dozen home runs in 1982, and then hit a career-high .271 with a career-best 24 homers in 1983. In the latter year, he was in the top ten in the National League in home runs and slugging percentage.

Davis hit .256 with 19 homers and a career-best 94 RBI in 1984 as the Cubs won the NL East division title. He was in the top ten in runs batted in that summer and was third in the NL in intentional walks, while making the All-Star Team and finishing tenth in Most Valuable Player voting. In that season's NLCS, he hit .389 with a pair of homers as Chicago fell to the San Diego Padres in five games. After putting up subpar numbers in 1985, he bounced back with 21 home runs in 1986 and once again made the All-Star team.

By 1988, Damon Berryhill had become the Cubs' regular catcher, and Davis was dealt to the Atlanta Braves at the tail end of that season. He split time behind the plate with Bruce Benedict and John Russell for the Braves in 1989, but was released early in the 1990 campaign when he started off 2-for-28. After briefly playing in the Detroit Tigers chain that summer, he hung up his cleats at the end of the year.

Overall, Davis hit 127 home runs over 1,082 major league games. One of the most similar players to Davis, according to similarity scores, was his contemporary in the other league, Ernie Whitt.

In 2003, Davis managed the Calgary Outlaws and in 2006, he became the manager of the Peoria Chiefs in the Cubs organization where his hitting coach was Barbaro Garbey, the former Detroit Tigers player. After the 2006 season, Davis was named manager of the Daytona Cubs. In 2009, Davis served as the Cubs' Minor League catching coordinator. Davis returned to managing in 2010, leading the Boise Hawks of the Northwest League. Davis was hitting coach of the Lake Elsinore Storm to begin 2014 and El Paso Chihuahuas in the second half of 2014 and 2015. On June 16th, he replaced Pat Murphy, who had just been appointed manager of the parent San Diego Padres, as El Paso's manager, a role he had previously filled on an interim basis when Murphy had sought permission to interview for the position of manager of the Milwaukee Brewers earlier that season. Davis moved to the Cincinnati Reds chain as hitting coach of the Louisville Bats in 2016-2017. In 2018, he became manager of the Pensacola Blue Wahoos.

Jody's son Josh has been an assistant college coach.