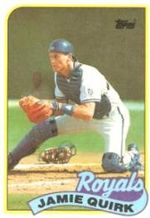 Despite never being a regular starter during his career, Jamie Quirk spent parts of 18 seasons in the majors. He was planning to play football at the University of Notre Dame when he was selected by the Kansas City Royals in the first round of the 1972 amateur draft. He signed with the Royals and made his big league debut in September 1975. Later that month, he hit his first big league homer off future Hall of Famer Rollie Fingers. An infielder and outfielder early in his career, he spent the 1977 season with the Milwaukee Brewers before returning to the Royals, who converted him to a catcher, which is where he primarily played for the remainder of his career.

The 1984 season was a rather full year for Quirk. Before the season began, he was released by the St. Louis Cardinals and named to their coaching staff. He was signed as a player by the Chicago White Sox in May and appeared in 3 games for the club before being sold to the Cleveland Indians in September. He hit a homer in his only at bat with the Tribe, who released him after the season.

He hit his only career grand slam on August 22, 1987 for the Royals against the Milwaukee Brewers. Mark Knudson was the pitcher for the Brewers. The Royals won the game, 8-7.

Quirk spent the remainder of his career with several teams, most notably the Royals (again), and the Oakland Athletics. After retiring as a player, he has been a coach with the Royals (1994-2001), Texas Rangers (2002), and Colorado Rockies bench coach (2003-2008). He was employed as a pro scout for the Cincinnati Reds then was the bullpen coach for the Houston Astros in 2010 and 2011. In 2012, he moved to the Chicago Cubs as bench coach under Dale Sveum.

Quirk returned to the bench as manager of the Lake Elsinore Storm in 2014. In 2019, he was named minor league catching coordinator for the Miami Marlins.

With 43 career homers, Quirk held at one time the record for the most major league home runs by a player whose name starts with "Q". He has since been passed by Mark Quinn, who like Quirk hit the bulk of his home runs as a Royal, before Carlos Quentin passed both by a huge margin.

His son, Remer Quirk, was drafted in the 2008 amateur draft.