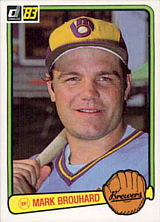 In his only postseason appearance, Mark Brouhard made it count by going 3-for-4 with a home run, 4 runs scored and 3 RBI with the Milwaukee Brewers as they defeated the California Angels, 9-5, in Game 4 of the 1982 ALCS. Brouhard spent 6 seasons as a backup outfielder and designated hitter with the Crew, finishing with a career .259/.305/.400 line and 25 homers in 909 career at bats. He spent parts of two seasons with the Yakult Swallows from 1986 to 1987, returning to the States to finish his career in the Angels minor league system.