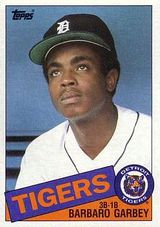 "Everyone knows who he is in Cuba. Everyone knows that he's the first one." - Jose Contreras, talking about Barbaro Garbey, the first member of Cuba's national team (in the Castro era) to come to the USA

Cuban-born Bárbaro Garbey spent three years in the majors and was a key player on the utterly dominant Detroit Tigers team that won the 1984 World Series. 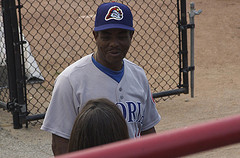 Garbey grew up as part of an athletic family, as his brother Rolando won two Olympic medals as a boxer and his sister Marcia competed in the Olympics in the long jump. Bárbaro was a member of the Cuban team that won the 1976 Amateur World Series but was later banned from playing baseball in his native land due to a gambling scandal. During the spring of 1980, he came to the United States on the "Freedom Flotilla", along with 125,000 other people.

In June 1980, Garbey was signed by the Detroit Tigers. After hitting .321 for the Evansville Triplets in 1983, he made the Tigers Opening Day roster the following season. He hit .287 with 5 home runs for the Tigers that year and appeared in four World Series games, going hitless in 12 at-bats. After spending 1985 with Detroit, he was traded to the Oakland Athletics for Dave Collins, but he was released before appearing in even one game with the club. He later appeared in 30 games for the 1988 Texas Rangers and then spent time in the Montreal Expos and Los Angeles Dodgers organizations. He also played in Venezuela and Mexico.

The two most similar players to Garbey through 2006, according to the similarity scores method, are Paul Smith and Bob Molinaro.