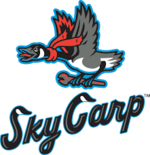 The Beloit Sky Carp of the Midwest League are nicknamed for geese. The Miami Marlins farmhands play their home games at ABC Supply Stadium in Beloit, WI.

Sky Carp owner Quint Studer, announcing the new nickname for the longtime Beloit Snappers on November 15, 2021, said they are non-migratory geese. Rumors had the Snappers with one flipper out of the door for years, but Studer says people who migrate to Beloit rarely leave and "Sky Carp" is to show the team will stay. Studer was in the process of changing the name during the 2020-2021 off-season, planning to tie a new brand to ABC's debut, but he stepped back shortly before the season. He said MLB's 2021 Minor League Reorganization made it advantageous to re-do the rebranding with MLB input. Despite the one-season delay, the name was one of the five nominees from the suspended name-the-team contest.

The Sky Carp were originally scheduled to begin play in the High-A Central, where the Snappers had been in their final season, but the league rebranded a few months after the team did when MLB restored minor-league historic names.