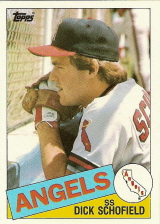 Dick Schofield was signed as a 1st round pick in the 1981 amateur draft by the California Angels and scout Nick Kamzic.

Schofield comes from a good athletic family. He is the son of Dick Schofield, uncle of Jayson Werth and Brother in law of Dennis Werth. His sister Kim Schofield Werth, competed in the U.S. Olympic Trials in the long jump and 100 meter dash.

Schofield Jr., like his father, was known for his defense at shortstop.

After retiring, Schofield took a couple of years off before venturing into coaching. He started as a coach for the River City Rascals in 1999. The next year he worked part-time as a special instructor with the Springfield Capitals. He earned a promotion in 2001 to manager and Director of Baseball Operations with the Rascals. Both of these teams played in the independent Frontier League.

Schofield moved into affiliated ball in 2002 as manager for the South Bend Silver Hawks in the Arizona Diamondbacks chain. This gig only lasted one year followed by a four year absence from the game. When he resurfaced, Schofield joined the Los Angeles Angels of Anaheim organization. He was the hitting coach for the AZL Angels in 2007-2010. He was slated to return to that level in 2011 but was promoted to hitting coach of the Inland Empire 66ers on May 31st following the resignation of Inland manager Tom Gamboa. Schofield worked as a roving infield coordinator for the Angels in 2012.

He moved to the Cincinnati Reds chain as a hitting coach for the Pensacola Blue Wahoos in 2013 and managed the Billings Mustangs in 2014-2015. He moved up to manage the Dayton Dragons in 2016. He was bench coach of the Blue Wahoos in 2017 and started the 2018 season as the bench coach for the Louisville Bats. When manager Pat Kelly was promoted to bench coach of the parent Reds, Schofield took over as manager on April 19th. He returned to the bench coach role for Louisville in 2019. Schofield was scheduled to manage the Daytona Tortugas in 2020 before the season was cancelled due to COVID-19. He was then development coach for Daytona in 2021 and bench coach for Louisville in 2022.